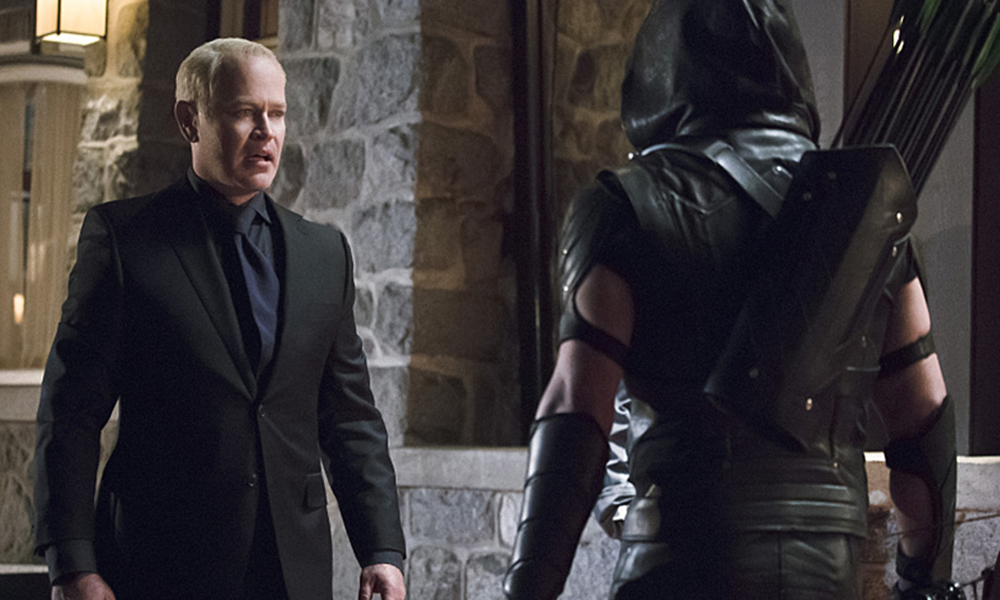 Arrow’s return from the winter hiatus seems to signal a return back to the darker days of previous seasons. After being shot by Darkh’s men at the end of the last episode Felicity is hospitalize in critical condition. Oliver is on the warpath against Darkh’s ghosts and enlists Captain Lance in order to find the villain. But when Oliver arrives at Darkh’s hideout all he finds is several Ghosts and an anarchy symbol painted in blood signifying that Lonnie Machin, aka Anarky, is also on Darkh’s trail.

Diggle takes extreme measures with his imprisoned brother to get information on Darkh. This leads the team to Darkh’s posh home and his secret family. Again however, Anarky has again beaten them to the punch. Oliver saves Darkh’s wife and daughter from Anarky but Machin escapes. Darkh arrives home, shocked to find that Oliver has discovered his home. He tells Oliver he will allow him a couple of week’s peace as thanks for rescuing his family but then promises to come after him and Oliver’s loved ones again.

We saw at the beginning of the episode that Oliver was once again standing at the grave of an unknown person. The obvious push is to make us believe that it is Felicity but that, of course, is a red herring. At the end we are back to the grave without revealing who is buried there. Felicity, although paralyzed from her wounds, is still very much alive.

Felicity being paralyzed seems to set her up to become the Oracle of the DC TV universe in place of Barbara Gordon and since they don’t have access to the Batman stable of characters It seems to make sense especially given her computer skills. It’s essentially the role she has been playing since the beginning. While not exactly like the comic book version Anarky is developing the psychological traits that put him on that path but damn the costume would beat the heck out of that stupid clear face mask.

After starting out the season living peacefully in a mundane suburban life, Oliver has descended back into the darkness of the first season. I, for one, am hoping he pulls out of the tailspin. It’s important that the Green Arrow be better than those villains he fights. Right now even Diggle is in a darker place after the actions he took against his brother, not to mention Thea’s continued fight against the blood rage of the Lazarus Pit.

Darkh is still not a character who can sustain a full season long’s worth of episodes. This is s story arc that will hopefully be resolved sooner than later so the Green Arrow can move on to other things. I didn’t love the episode. It didn’t have the big feel you would hope for after being off for over a month but there were still some things to like.