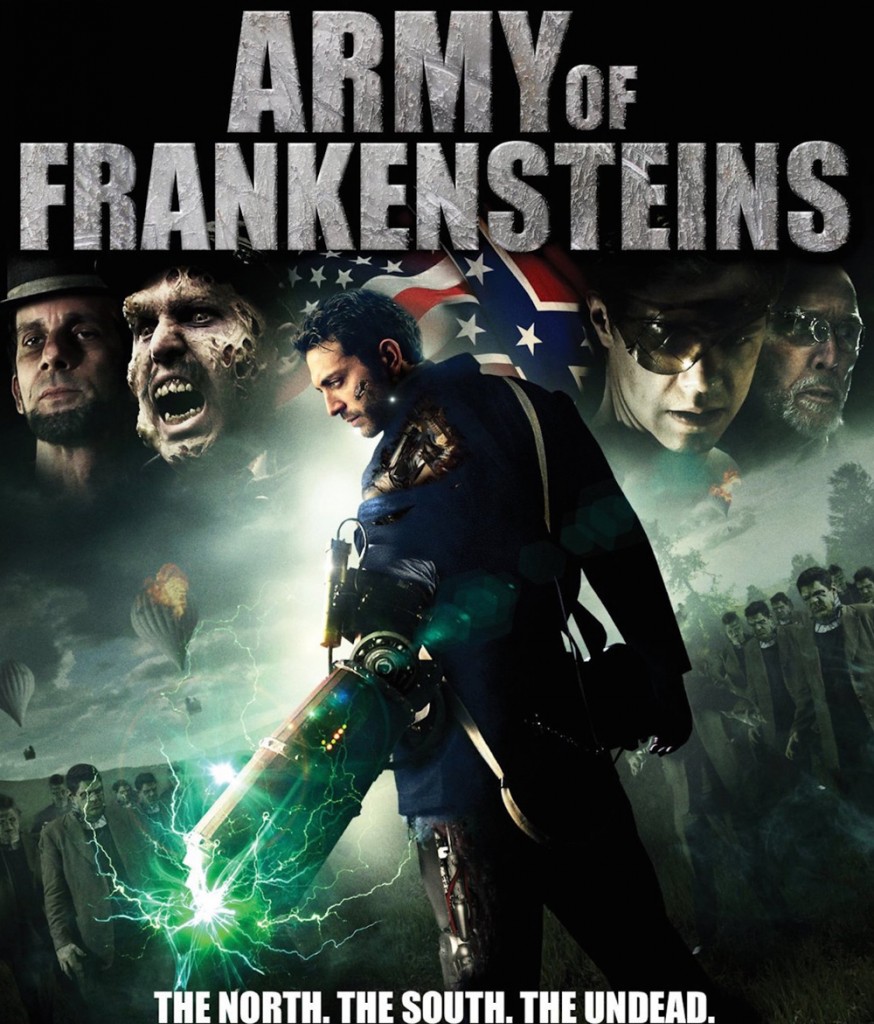 Army of Frankensteins “The War Between The States… of Life and Death.”

There comes a time when a premise is just enough to get me to watch a movie. Here, we have Frankenstein’s monster running amok during the American Civil War. It sounds as if it would almost be a story told by Mike Mignola and featuring his creation Hellboy. Throw in a mad scientist, a reluctant time traveler and a Robin (as in Batman’s sidekick) esque Igor and you have something no one has over conceived of before. Is this genre cocktail worth your while?

Army of Frankensteins suffers on multiple levels from acting to special effects. The story itself takes a great liberty with history, but then again so did Quentin Tarantino’s Inglorious Basterds. However, in this case, one can’t be so forgiving. Alan Jones (Jordan Farris) is on the verge of proposing to his girlfriend when he is abducted, harvested for organs, and then inadvertently sent back to the Civil War. He arrives in 1864 (which is incredibly important) to discover that “Frankensteins” from the multiverse have arrived. Alan must help Igor (Christian Bellgardt), the very same person who did the aforementioned crimes against him, to set the time stream right. As it was in Back to the Future, Alan potentially could erase his own existence if Solomon Jones (Rett Terrell) doesn’t marry the freed slave/ nurse, Virginia (Raychelle McDonald).

The army of Frankenstein’s creations all look exactly the same. This means that the multiverse really isn’t as diverse as we would think. In reality, it is just a simple way to have one actor, Eric Gesecus, play the same monster over and over again on a digital stage. This is one of the many sore thumbs of the movie. It was obviously shot digitally for time and money’s sake, but it lacks any artistic flair, which is the complete opposite of the end title sequence. There are times when the film is perfectly well lit and looks as if it was shot in a field with a cell phone. This is in great contrast to the saccharine love scenes of the film in both the past and present.

Camera tricks and special effects really aren’t the problem here. Neither are the store bought mustaches, beards, and brand new Civil War equipment. It is, after all, 1864 and everyone looks like they just rolled out their newest duds for the shoot. I doubt that there was even one real Civil War re-enactor in the whole movie. The main problem with Army of Frankensteins is the story. Alan and Igor are supposed to believably suddenly trust one another. Why? They both want to get home. We are given some of the love story between Solomon and Virginia, but Virginia throws herself at Alan in one scene and we have to ask, again, why? That scene really is the final nail in the coffin if you even made it that far into the film with any hope that it could get better. I pressed on only to find out that President Lincoln is off to Ford’s Theatre a year early (historically, it should be April 14th, 1865) and meets his death in a different way. Again, Quentin Tarantino has changed history, but here they jump the gun completely for no reason. We have monsters other than Frankenstein’s creation, steam punk weapons, even a balloon ride, and it’s just all so boring.

The concept here sounds fun, but every once of fun is sucked dry by all those involved save one, Christopher Robinson. Robinson, who plays John Wilks Booth, really does relish in his dark moment in history.

Army of Frankensteins suffers on multiple levels from acting to special effects. The story itself takes a great liberty with history, but then again so did Quentin Tarantino’s Inglorious Basterds.

Army of Frankensteins suffers on multiple levels from acting to special effects. The story itself takes a great liberty with history, but then again so did Quentin Tarantino’s Inglorious Basterds.