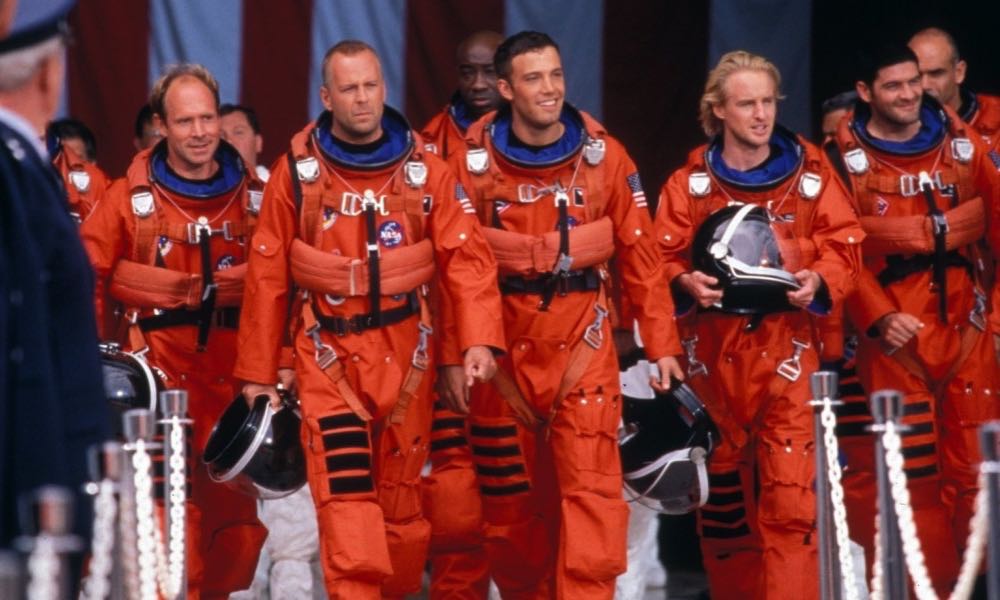 I re-watched Armageddon tonight, mostly because it’s been so long (about twenty years) since I saw it last. I vaguely remember not liking it much but could not remember why. I mean, Armageddon has a terrific premise to build on, but somehow this film fails to achieve its potential. Watching it again refreshed my memory of a film, obviously designed to be a blockbuster. An all-star cast, along with an array of what look like very expensive props and sets designed to make an impression, confirmed my suspicions that this is true. I remember now; someone spent a lot of money to get this movie made. I looked this film up on Rotten Tomatoes and was surprised to find this film has a much higher score from audiences than it does from movie critics. Somewhere, someone likes this movie much more than I do, and that’s okay. I suspect this movie plot’s sentimental elements might have something to do with that. Whatever floats your boat.

Armageddon begins with a voice issuing a stern warning suggesting that an asteroid hitting  Earth is imminent and could happen any moment. This is the beginning of a film that wants to be taken seriously, even if that means scaring its audience half to death to accomplish that. The film almost immediately shifts gears and attempts to be amusing before depicting what has become Michael Bay’s signature style, a self-indulgent orgy of pyrotechnics, burning and exploding cars flying through the air and CGI chunks of space rock destroying downtown Manhatten. All in the service of setting up the film’s main plot.

Next, we meet most of the cast, and I was shocked for a moment at how young everyone looks before remembering this film is over twenty years old.  Our sensibilities shift and change all the time, and to some degree, this film falls victim to that. I realized that might play a role in my appraisal of this film, and it probably does, but this is not my first time watching a film more than twenty years old, and I have learned how to make certain allowances.

Not familiar with this title or don’t remember the film? Armageddon is a 1998 American science fiction disaster film produced and directed by Michael Bay, produced by Jerry Bruckheimer, and released by Touchstone Pictures. The film follows a group of blue-collar deep-core drillers sent by NASA to stop a gigantic asteroid on a collision course with Earth. It stars Bruce Willis and an ensemble cast comprising Ben Affleck, Billy Bob Thornton, Liv Tyler, Owen Wilson, Will Patton, Peter Stormare, William Fichtner, Michael Clarke Duncan, Keith David, and Steve Buscemi. I enjoyed the cast to varying degrees, especially Buscemi and Stormare. I’m a fan of Willis, have been for years.

Armageddon is a shamelessly corny film that relies on a super-sentimental subplot and attempted mesmerizing visuals at the expense of making a great film to see while blatantly trying to transport some classic war movie tropes into outer space. After an explosive beginning, Armageddon attempts to become a character-driven story to some degree, highlighting the cast it introduces while also attempting to keep this film family entertainment, which means no copious swearing, which most anyone would expect.  However, it does its best to assemble a cast representing a zany collection of likable losers; Armageddon falls far short of doing that; I did not find most of these characters likable until the end of the movie. The idea of zany, lovable losers destined to tackle a vital importance mission is not new. Also, I am not a fan of most of Bay’s decisions regarding this film. Armageddon portrays macho intensity by having everyone yell at each other simultaneously, and scenes that are supposed to be chaotic are depicted with a constantly moving and shaking camera. Doing that does portray chaos. Still, it certainly is not pleasantly entertaining after a few seconds. While all this is going on, Armageddon introduces a sentimental subplot; the film insists on perpetuating until the end.

Like any movie, this film has qualities both good and bad. Although it has a narrative that is not very well written or intelligent, and it’s so full of stereotypes and cliches from end to end, it’s almost as a child wrote it. And while Armageddon’s dialogue is less than memorable, this film does have its moments. Though the film was released to mostly mixed reviews, it was an international box-office success, becoming the highest-grossing film of 1998 worldwide. However, astronomers noted that the similar disaster film Deep Impact was more scientifically accurate. Even though I am a sucker for these types of fairy tale endings (the film does make me cry at the end) Personally, I do not care if I see this film again for another twenty years.