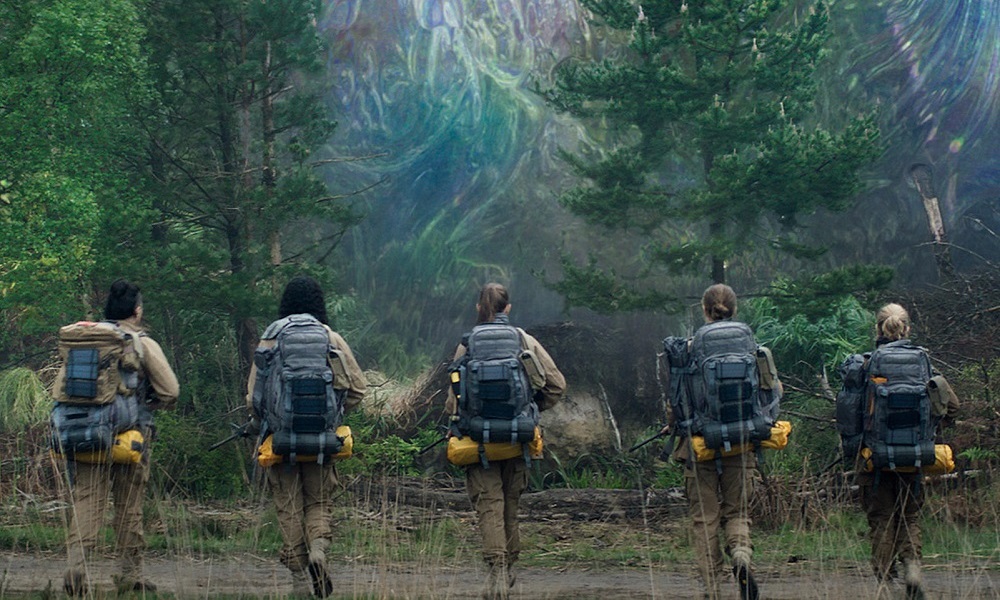 SIGHT AND FURY SIGNIFYING NOTHING: A REVIEW OF ANNIHILATION (2018) SANS SPOILERS

In Alex Garland’s Annihilation, an extraterrestrial object that landed on a coast of the Southeastern United States three years earlier created “The Shimmer”—an area bounded by a wavering opalescent curtain of air and continually encroaching outward from the lighthouse where the object landed.  The US government has kept “Area X” a secret and lost all expeditions sent into it.  But the Shimmer’s unrelenting expansion poses an existential threat to the world, so another expedition—one comprised only of women to appear less threatening—is sent.  (Whether or not any of the expeditions approached the lighthouse by sea instead of by land isn’t made known.)

Writer/director Garland based Annihilation loosely upon the 2014 novel of the same name by Jeff VanderMeer.  And he obviously copied the slow, somber, self-serious film style of Denis Villeneuve’s Arrival (2016), another movie about an enigmatic alien visitation.  (In contrast, the previous and first movie Garland directed, Ex Machina (2014), about a female android being tested for true/strong artificial intelligence, has a maladroit open form film style that mostly ruins it.)  And unfortunately, just like Arrival, Annihilation is a plodding, ponderous, pretentious, and pseudo-intellectual work of SF cinema undeservedly lauded as “thinking person’s sci-fi.” 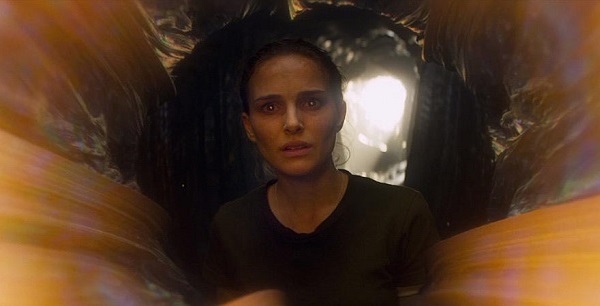 Annihilation and Arrival both have a dark, vaguely unsettling tone, a creeping pace, a nonlinear narrative, and a premise predicated upon one of psychology’s more unsubstantial notions.  In Arrival, it’s the strong version of the Sapir–Whorf hypothesis, the idea that an individual’s language determines and limits that individual’s thought processes.  (That movie’s protagonist becomes prescient from *scoff* learning the language of the prescient aliens. *snicker*)  In Annihilation, it’s Sigmund Freud’s “death drive,” the idea that humans have an inborn drive toward death and self-destruction, life’s return to an inorganic state. 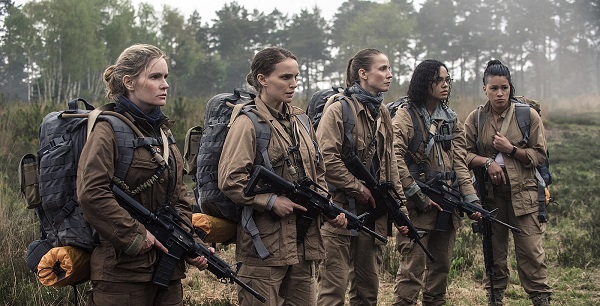 Accordingly, all five members of the latest (and last) expedition into the Shimmer are broken women with little or no investment in their lives (and that’s precisely why they were picked for the suicidal expedition).  Jennifer Jason Leigh’s character has terminal cancer.  Natalie Portman’s character, a professor of cellular biology, lost her husband to the Shimmer and feels guilt over her infidelity.  Another character, a surveyor/geologist, lost her daughter.  The other two, a physicist and a paramedic, are a self-harmer and a recovering addict, respectively.  And they all make the stupid decisions typical of horror movie characters, but in this movie it’s for a good cause: supporting the movie’s theme.

Annihilation does work fairly well as a visceral horror movie, if not as an intellectual SF movie.  The atmosphere of foreboding—the movie’s greatest asset—increases as steadily as the Shimmer’s area, the body horror is disturbing, the monsters are scary, and the climax in the lighthouse is deeply unsettling.  But the movie isn’t as horrifying and terrifying as it easily could’ve been, given its premise.  It doesn’t have quite enough pay-offs, and the expedition members—even for being self-destructive—don’t react as strongly and appropriately as they should to the horrors and terrors around (and in) them.  And so neither does the audience.

One thought on “Annihilation (2018) movie review”