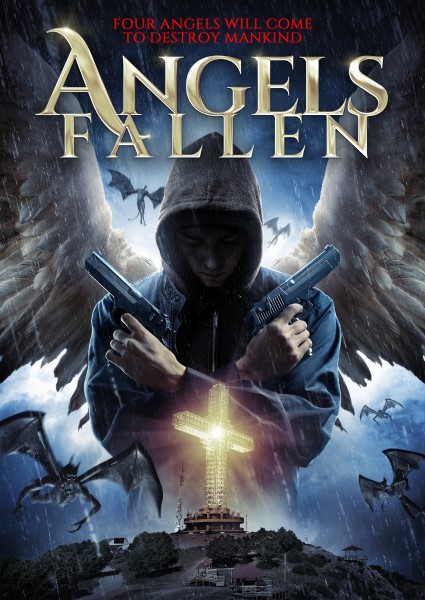 Where do these movies come from? I think the story of how the money and talent gets devoted to these incomprehensible productions must be considerably more interesting than the rambling amateur efforts on screen. Did someone owe someone else a favor? Was this some kind of nepotism trying to give a push to the child/friend of someone famous? Is this a tax write off? This little confusing film somehow wrangled the talent of Eric Roberts and Micheal Madsen and it clearly shot in multiple locales.

And it STILL couldn’t afford a decent microphone so you could even hear half of the cryptic exposition.
I ask these questions because Angels Fallen is nearly impenetrable without having an extensive backlog of genre films…which luckily I have. This is the kind of hodgepodge fan-fiction that only clicks if you recognize what is being ripped off at any given moment. To someone who hasn’t seen a ton of movies the in media res approach is baffling. There’s demons just hanging out in a bar…and when they die they burn up? The psychic has to duck her head in a sink to have visions?

WHAT IS GOING ON?

I’ll tell you as far as I understand it. The demons catching on digital fire is a concept ‘borrowed’ (charitably put) from the vampires in the movie Blade. The physic having visions by immersing herself is water is borrowed from the film Constantine. In the context of THOSE films there was some explanation about why these things occurred (some kind of handwaving about vampires overheating and psychics using water) but in Angels Fallen there is NO explanation.
You’re supposed to already know because you’re already supposed to have seen the films this one is emulating. Why do the characters carry silly looking guns if they can just kill demons with bullets and knives? Why is there a secret science base hidden in a church? There’s an evil doll in a bird cage people refer to as an angel in one scene.
Why is there a plastic snake wrapped around a broom handle being used as a staff? Why does Gabriel walk around on top of a giant cross in a bad green screen effect?

It’s all recycled homages to other films, other young adult novels, maybe roleplaying scenarios.
There’s no other way any of this is more than gibberish.
In one scene a scientist guy holds up a magnetic toy and there’s comedy music. There’s nothing specifically comedic occurring and the toy isn’t referenced again so…is this a placeholder for comedic relief? Did someone see goofy scenes in action movies and decided they needed one too…but had no idea how to actually write a comedic scene?

WHAT IS GOING ON?

The effects work is decent (for the most part) so at least post-production was on the ball.
It’s not terribly directly even if the sound balance is off. SOMEONE put a bit of money into this. I’ll be darned if I know why. There’s a lot of Eastern Europeans in this movie. Was it some kind of local art project?

No, this is not a sequel to something. I checked. Somehow Gabriel and Micheal (who traditionally are angels themselves) are fighting angels AND demons and they have had childhoods and relationships…regardless of the fact that angels as a concept are not the same as humans in any iteration I can think of. So…they aren’t angels? Are they ‘Angels Fallen’ like the title? Never clear.

Treating Christianity like it was a grab bag of names and ideas is not only a bit disrespectful it’s also ultimately befuddling. Not everyone knows a great deal about Christianity, so tossing out names like ‘Eve’ is going to be greeted with a shrug, especially when Eve in Angels Fallen is apparently a psychic.
Every moment of this film is a wide-eyed bamboozling choice. The lunatics ran this asylum and no one bothered to ask ‘why?’ at any point in this production apparently. So it falls the audience to ask the questions that will never be answered.

The acting isn’t staggering bad despite the rancid writing. Everyone does what they can with the parts they have to play with and they seem to be having fun.

You can probably find some enjoyment in Angels Fallen as a ‘so bad it’s enthralling’ production. I’m hoping someday the tome of literature necessary to understand all the nonsense lore is released so I can rewatch this thing and finally understand at least a modicum of what is happening or who anyone is.

Or, better still, maybe a documentary can be made to reveal the surely bizarre machinations behind the scenes.
Angels Fallen is undeniably a failure in being an exciting, hip and emotionally compelling horror film, but as a surreal shlock fever dream I’d actually give it high marks.