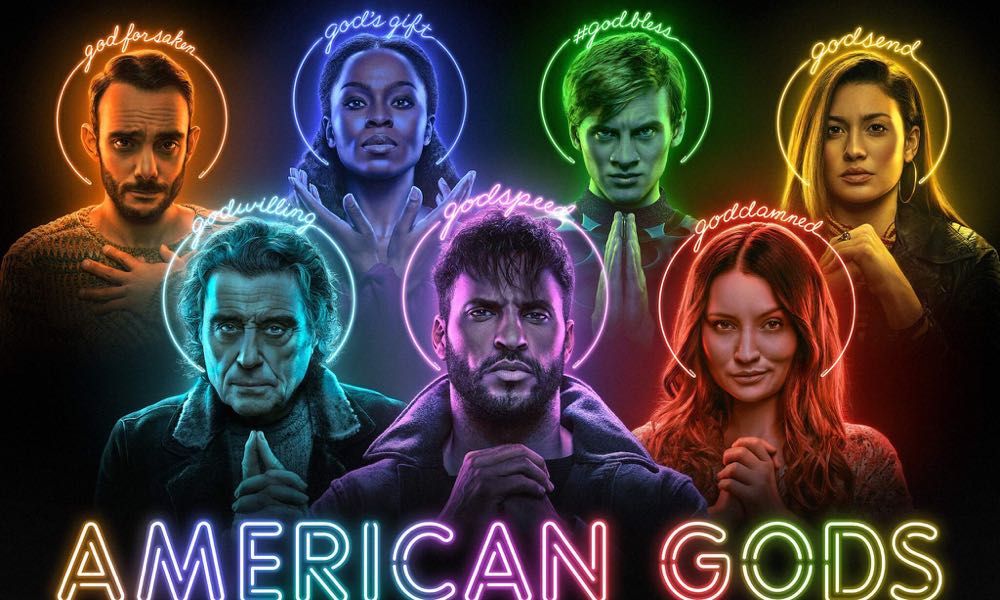 The third season of American Gods has just concluded, and it is, at the moment, unclear if there will be a fourth season or if the end of season three will spell the end for this surreal tale of men and the fickle gods they worship. This series’ sprawling dream-like narrative is oddly entertaining. Still, the emphasis is definitely on the surreal. The series is a  fantasy that seems to have themes involving faith and religion. From the moment the credits begin to roll, it becomes clear this series speaks largely in symbolism, which it leaves to us to interpret as best we can. So much so, in fact, It sometimes seems American Gods is attempting to speak directly to our subconscious, bypassing our awake brain parts entirely. Not only are the events of the show’s narrative symbolic, often touching on what Jung referred to as archetypes, but the characters too are also equally symbolic here, making the entire series very reminiscent of an entertaining long-drawn-out dream or nightmare.

American Gods is not so much a single storyline, as it is a collection of storylines. Each storyline is populated by engaging, sometimes bizarre characters involved in events that vary from the mundane to the outrageous. All of these stories are connected to some degree. This allows the show’s narrative the flexibility to switch from one story to another, something the series manages to pull off without noticeably missing a beat. Based on The novel of the same name. American Gods (2001) is a fantasy novel by British author Neil Gaiman. The novel is a blend of Americana, fantasy, and various ancient and modern mythology strands centered on the mysterious and taciturn Shadow Moon, the story’s main character. The show’s narrative ends up seeming like a history of religion in review.

Neil Gaiman is one of modern genre literature’s consistently most popular, multiple-award-winning writers whose credits include the comic book series The Sandman and novels Stardust, American Gods, Coraline, and The Graveyard Book.

Beyond being created to be an entertaining read, American Gods was clearly intended to comment on religion and faith. Not just what we normally think of as religion. The series also draws into the discussion all the stuff that has, to a degree, replaced religion in our modern lifestyles—things we worship in other ways by spending a lot of time and money on. Religion is a tricky topic to tackle without lots of people getting overly excited; This series does a good job of sidestepping a frontal assault on the question of whether men created their gods, or the other way around, while still providing lots of commentary on the topic.

From the moment we meet Mr. Wednesday, aka Odin ( portrayed by the esteemed Ian McShane), we are informed he (Odin, the Norse all-father of the old gods) is nothing more than a charlatan and con man only interested in his own self-serving agenda. This infers, of course, that all gods old and new are pretty much the same. Was this the first of many clues that this story, although charming to a degree, is also cut from the same cloth? The conclusion of the series third season certainly makes it seem that way. Contributing to my suspicions that the entire story is just another one of Odin’s cons, in a long-drawn-out battle of wits with Loki (Crispen Glover’s Mr. World). Season 3 leaves us wondering if Shadow Moon pays the ultimate price for his ambitions to godhood. For now, it sure looks that way. I also suspect this story is more about the journey than it is about the journey’s conclusion.

Not familiar with this title? American Gods is an American fantasy drama television series based on Neil Gaiman’s 2001 novel of the same name and developed by Bryan Fuller and Michael Green for the premium cable network Starz.

Highly regarded and rated TV-Ma because of language and a myriad of other reasons such as sex and drugs, this series being on TV is definitely part of the legacy of Games Of Thrones and part of the maturing of genre entertainment on television and in movies in a post GOT (Game OF Thrones) world.