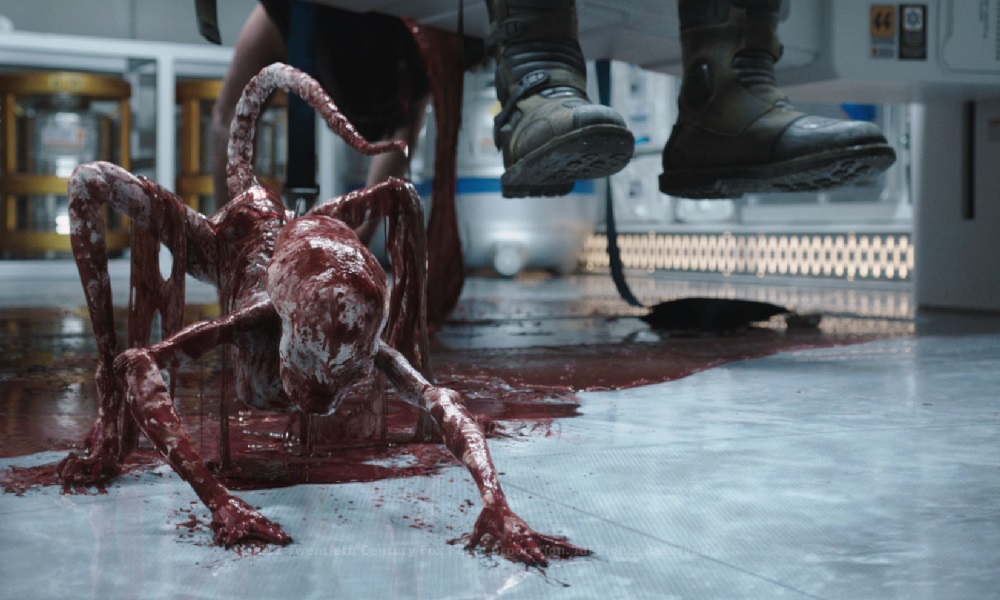 Ridley Scott’s Alien (1979) has a plot fit for an SF B-movie, which makes sense because its writers borrowed from two SF B-movies: It! The Terror from Beyond Space (1958) and Planet of the Vampires (1965). But Alien transcends its cheesy, pulpy premise because of its A-level directing, acting, design, special effects, and background detail. With Prometheus (2012), the first prequel to Alien, Scott had the opportunity to make another “Alien” movie without being limited by a B-movie plot … and blew it. What makes this really unforgivable is that the movie’s teaser trailer (the one with the pulsating industrial music and the title appearing by segments as in the original Alien) is one of the greatest ever made.

Prometheus is pretentious—its writers and director ostensibly concerned with weighty philosophical matters—but not terribly profound. Its script seems as if it were written by mousse-’froed “Ancient Aliens” host Giorgio Tsoukalos for a Syfy Channel original movie. And Prometheus’s plot doesn’t just have holes: it’s in tatters. All the characters, including the android and the “Engineers,” aliens who created human life on Earth, do one imbecilic thing after another. In the original Alien, this is understandable (and was intended) because the Nostromo’s crew members are supposed to be “truck drivers in space.” But the Prometheus’s crew was carefully chosen to find the Engineers and is led by an executive and four scientists.

And the characters aren’t just stupid: they’re one-dimensional—lacking even the surface reality of two-dimensional characters—and unsympathetic. They’re a lump of anonymous humanity, like a gaggle of strangers milling about in a public place. An audience won’t care about a story if it doesn’t care about the characters, and the only character interesting enough to merit even its attention is the android David, played by Michael Fassbender, a gifted actor who seems incapable of giving an even mediocre performance. And that must be why Fassbender was given two different androids to play—David and Walter—in Prometheus’s sequel, Alien: Covenant (2017). 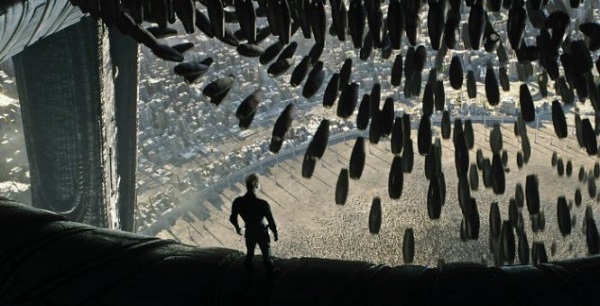 Alien: Covenant is a direct sequel to Prometheus and begins a decade after its predecessor ends. But the strategy Disney used for Star Wars: The Force Awakens (2015)—satisfy and mollify fans disappointed by George Lucas’s prequels by rehashing elements of the classic originals—was obviously appropriated for it. Covenant contains many story, setting, sight, and sound elements from the original Alien, its superlative (and in some ways superior) sequel, James Cameron’s Aliens (1986), and even Scott’s other SF masterpiece Blade Runner (1982). And the most important element of all is the original monster.

Just as even those who aren’t “Star Wars” fans must admit that Darth Vader is one of the coolest villains ever created, even those who aren’t “Alien” fans must admit that the creature H.R. Giger designed is one of the coolest monsters ever created. It’s an amalgam of quite a few things humans are hard-wired to fear: reptiles, insects, sharks (its head), snakes (its tongue and tail), and rotting corpses (its torso). And, as if that weren’t enough, the creature has a phalloerotic quality that’s really creepy! 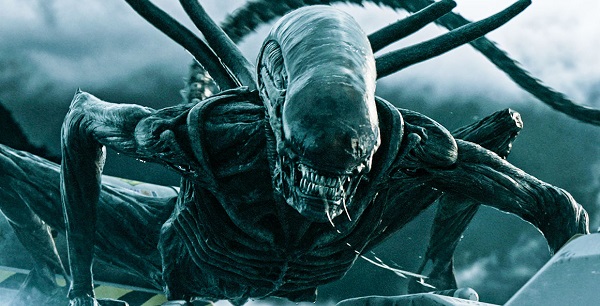 Alien: Covenant, featuring the original creature along with those other classic elements, is superior to its predecessor Prometheus but still inferior to Alien and Aliens. It’s characters are differentiated a little more into recognizable individuals but—except for the two androids played by Fassbender—still not as interesting and sympathetic as the ones in the original two. It doesn’t have quite as many plot holes as Prometheus but still elicits more than an acceptable level of eye rolls. However, it does something that none of the other “Alien” movies following the first two does: it truly scares its audience.

In conclusion, Alien: Covenant isn’t on the same level as the original two “Alien” movies—Ridley Scott’s Alien and James Cameron’s Aliens—but it’s only one level below them. (It merits a B- instead of Alien’s B+/A- or Aliens’s A.) It’s definitely the best of all that have come since by a considerable margin. (Of course, there are those who would say that’s not much of an achievement.) But it’s still not the “Alien” movie we wanted and were expecting from Sir Ridley. Maybe the next one … or the one after that …

Alien: Covenant DVD Extras:
⦁ Extended scene: “Prologue”: What was left out of the superb opening scene is David’s describing the end of Wagner’s opera “Das Rheingold”: “The gods have rejected mankind as weak, cruel, and filled with greed. So they are leaving the Earth forever and entering their perfect home in the heavens, the castle of Valhalla. But … the gods are doomed. [T]hey are as venal as the humans they have rejected. … They are false gods.” This would’ve been foreshadowing and explained the motives of both the Engineers and David.
⦁ Deleted scene: “Walter in greenhouse”: Walter whistles while he works in the spaceship Covenant’s greenhouse. This scene would’ve added no value to the movie.
⦁ Extended scene: “Oram and Daniels”: After the ship’s captain burns to death in his damaged cryopod, the bungling second-in-command Oram tells the third-in-command Daniels, who was the captain’s wife, “He was a genuine leader. And I know that he and I didn’t always see eye-to-eye, but I admired him,” and makes a ham-handed attempt at commiseration. This would’ve revealed even further his gross incompetence at leadership.
⦁ Deleted scene: “Walter visits Daniels”: Walter the android provides much better condolences and comfort for her by acting as her cannabis connection. This scene is silly and would’ve added no value to the movie.
⦁ Deleted scene: “Daniels bedroom flashback”: While they’re discussing their planned log cabin, the captain’s wife tells him, “You are the most indecisive man I have ever met.” How could he have been such a good leader, then? This scene would’ve added no value to the movie.
⦁ Extended scene: “Jacob’s funeral”: This sub-scene illustrates further how close the deceased captain’s wife is with Walter and explains that “[t]he crew is made up of couples” by design. (Walter’s relationship with her is obviously meant to be compared with and contrasted to David’s relationship with Dr. Elizabeth Shaw, the Prometheus’s chief science officer.)
⦁ Deleted scene: “Ledward’s fall”: A member of the security unit was infected by a swarm of spores that entered his ear canal. This brief scene featuring him becoming even more ill was probably cut for being redundant and slowing the pacing.
⦁ Extended scene: “Crossing the plaza”: The shots deleted from the scene of David leading Covenant crew members through the “dire necropolis” that was once an Engineer city added no value to it.
⦁ Deleted scene: “Daniels thanks Walter”: Walter informs Daniels that David was the prototype for him and “many others.” And when Daniels thanks him for saving her life, he explains, “I’m here to serve.” After the infamous upcoming scene in which David teaches Walter how to play his flute, Walter insists to him that he saved Daniels out of “duty” rather than “love.” So this sub-scene is redundant.
⦁ Deleted scene: “Rosenthal prayer”: In this scene segment, a member of the security unit says a prayer in Hebrew as, unbeknownst to her, she’s being stalked by a “neomorph.”
⦁ Deleted scene: “Walter reports back”: Walter tells Oram and Daniels, “There’s an emotional intensity to [David] that I don’t understand.” This sub-scene would’ve added no value to the movie.
⦁ Extended scene: “Stairs to eggroom”: As David and Oram are descending the stairs, David offers him a pale, powdery substance to be snorted to cover up “the smell [of the eggs that’s] much like lavender.” Was it actually a drug? Is this why Oram’s stupid enough to peek into an open facehugger egg at David’s request, even after learning that David treats the neomorphs like pets and engineered his own organisms from the ones produced by the Engineers’ mutagen/pathogen?
⦁ “Phobos”: Weyland-Yutani’s “short list for Mission: Covenant team Alpha” is psychologically vetted, apparently on Phobos, one of Mars’s moons.
⦁ Director commentary by Ridley Scott: In this “off-the-cuff” commentary, Scott says that the purpose of the Alien prequels is to “revisit the question, the biggest question of all about the whole movie which no one ever asked: ‘Who would make such a … hideous thing and for what reason?’”