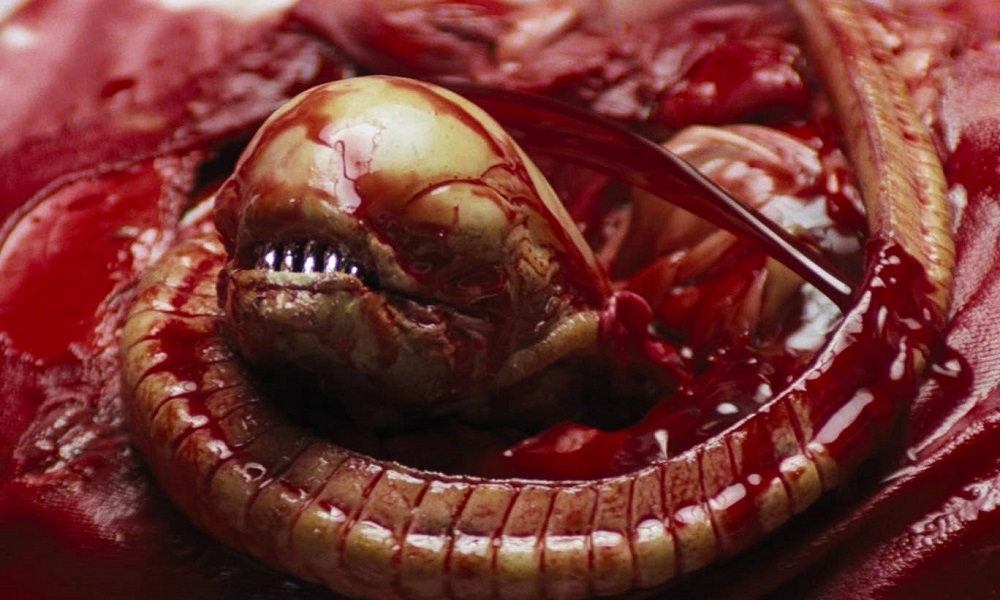 STAR BEAST: A REVIEW OF THE ORIGINAL ALIEN (1979) SANS SPOILERS

On October 13, 15, and 16 of 2019, Fathom Events, Turner Classic Movies, and Twentieth Century Fox presented the original theatrical release of the original Alien (1979) in select theaters.  The career breakthrough for both actress Sigourney Weaver and second-time director Ridley Scott, this SF/horror oldie-but-goodie opened at the beginning of the summer of 1979, was a blockbuster, and spawned a franchise that includes a direct sequel superior to it on the whole.

Its original writers Dan O’Bannon and Ronald Shusett pitched their story to movie studios as “Jaws in space,” alluding to the very first summer blockbuster (and second-time director Steven Spielberg’s career breakthrough).  Alien, like Jaws (1975), is about a “perfect” preternatural predator that must be killed by the crew of a ship; but the ship is a spaceship instead of a fishing boat and the monster is a malevolent alien creature instead of a great white shark. 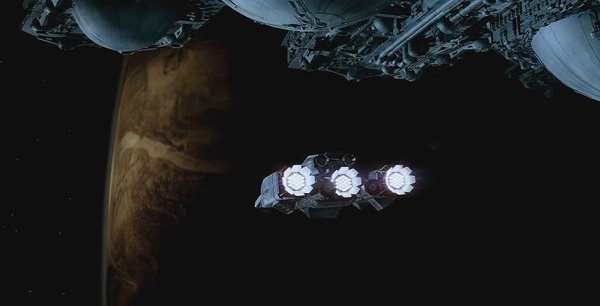 Jaws, a masterwork by a wunderkind based upon a mega-bestseller and featuring first-rate performances by top actors, remains a great movie by today’s standards and after many repeat viewings.  And so it stands the test of time in both senses.  But does Alien?  Is Alien really the classic it’s purported to be?

Like Jaws, Alien was directed by an auteur at the top of his game.  The movie’s dialog-free (but superbly scored) first 6½ minutes establish its tone and setting brilliantly.  Its title appears piecemeal along with its opening credits, both superimposed over a camera crawl past an eerie ringed planet, eliciting vague apprehension.  Space is a void hostile to human life.  Next, a mile-long extraplanetary refinery that looks like a gigantic Gothic castle passes distant stars, towed by a huge commercial space tug, and the camera slowly explores cramped, dingy, unoccupied interiors of that ship, establishing extreme isolation.  The crew of the towing vessel is light years from any help it might need.  But its vacant bridge has an abrupt burst of activity when an alien transmission is received, and in a creepy but surreally humorous bit two emergency helmets seem to converse with each other because of their reflections of the video screens in front of them and the accompanying noises.  And at the climax of the opening sequence, the cryosleep vault seems to bloom like a flower when its lights come on and the lids of its radially arranged bed capsules lift like transparent petals. 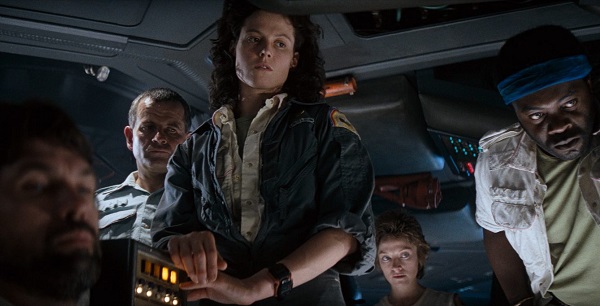 Being wakened from cryosleep is depicted as a caricature of being wakened for work by an alarm clock, which is appropriate because the seven astronauts are essentially “truck drivers in space,” a novel concept in 1979.  Instead of adventure or discovery, they travel in space merely for the pay and benefits provided by the corporation that employs them and owns their well-worn ship, which has a functional, industrial aesthetic both internally and externally.  The grounded futuristic designs by concept artists Ron Cobb, Chris Foss, and “Moebius” and OCD-level perfectionism and detail-orientedness of director Scott help maintain viewer interest during the slow segments and—along with the naturalistic acting and dialog—provide verisimilitude.

And the “biomechanical” alien craft and creature designs of Swiss surrealist artist H.R. Giger, like nothing seen before in a movie, horrify and fascinate in equal measure.  The alien derelict spaceship emitting the signal and its long-dead pilot elicit both religious awe and primordial dread.  And the “eighth passenger” that terrorizes the crew of the interstellar towing vessel is one of the scariest monsters ever created.  It’s an amalgam of several things humans are hard-wired to fear: reptiles, insects, sharks (its head), snakes (its tongue and tail), and rotting corpses (its torso).  One of its bodily fluids is an extremely corrosive acid.  And, as if all that weren’t enough, it has a rapey, phalloerotic quality that’s really creepy! 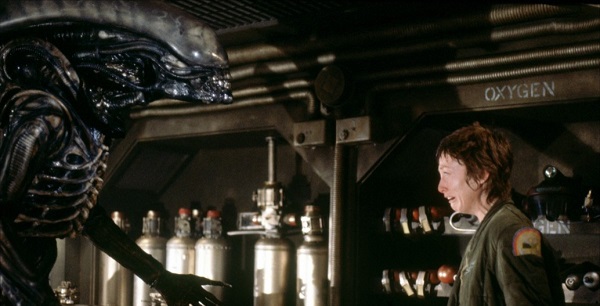 The Lovecraftian horror of the alien derelict, pilot, egg chamber, and parasite/predator, the verisimilitude of the settings and characters, and the steady increase of danger and tension made Alien extremely shocking and unbearably intense when first released and created doubt that any of the crew would survive.  But by today’s standards the movie is slow-paced and somewhat tame.  And so, especially after repeat viewings, its A-level directing, acting, visuals, and sound can no longer quite cover for its B-movie premise—confected from swipes from B movies such as It! The Terror from Beyond Space (1958) and Planet of the Vampires (1965)—and “idiot plot” (SF author James Blish’s phrase for a plot moved forward by characters’ poor decisions).

The crew members of the space tug are blue-collar astronauts but astronauts nonetheless, and yet their stupidity causes almost all the story’s plot points.  (Furthermore, illustrating Charles Darwin’s principle of natural selection described by Herbert Spencer’s phrase “survival of the fittest,” every character who dies does so after making a moronic mistake.  The only character in the movie who’s not an idiot is Weaver’s, Warrant Officer Ellen Ripley.  Presumably she’s stuck in her plebeian job because of her abrasive, overbearing personality.)  But although Alien’s luster has faded with age, it’s a solidly good movie even by today’s standards—and could be restored to its former glory via re-editing with unused footage and CGI additions. 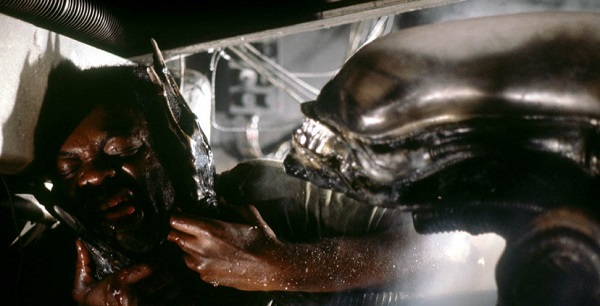 Here’s an unvarnished look at the pig (the underlying idiot plot) without the designer lipstick (the high-level directing, acting, visuals, and sound):
ALIEN: IDIOT PLOT: A SPOILER-SATURATED SUMMARY OF ALIEN (1979)

And here’s how to enhance the movie to make it as good by today’s standards as it was by 1979’s (without doing a George Lucas by defiling it):
ALIEN: ULTIMATE VERSION: HOW TO MAKE ALIEN (1979) GREAT AGAIN