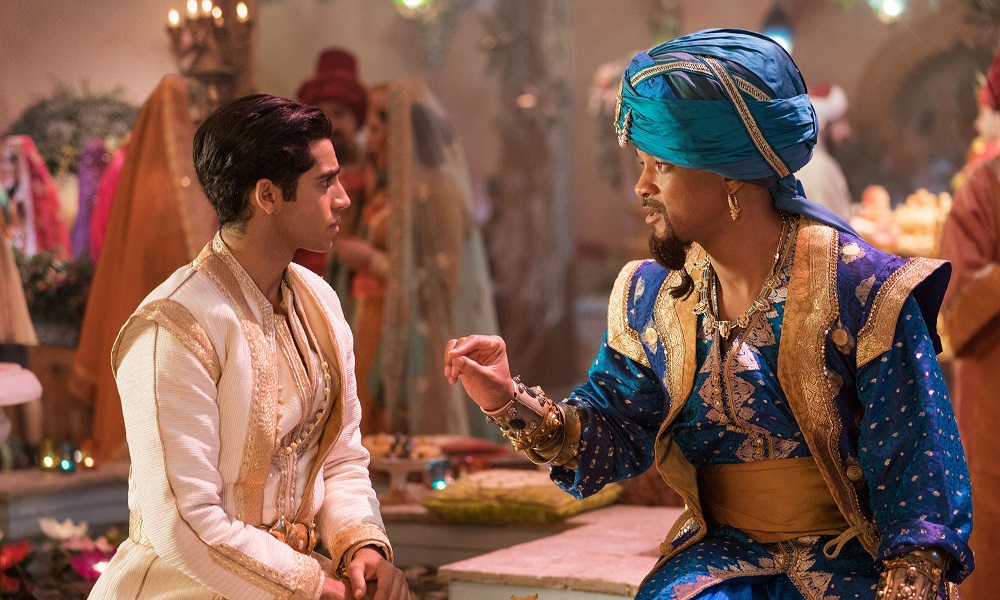 I maintain that Disney’s live-action reboots are a dubious enterprise at best. Yet they make scads of money, and are able to deliver distinctive versions of their retreads often enough to justify the effort creatively. It remains a questionable prospect, and I suspect it won’t end well, but for now, there are definite victories to be savored.

Case in point: Aladdin, a movie that looked all set to explode on the tarmac, and which arrives in front of an audience gritting its teeth in horrified anticipation of The Stink. And yet, for all the terrible advertising, the film itself is solid, well-made and even light on its feet sometimes. Diminished expectations help its case, but the fact remains that this Aladdin could do worse. A lot worse.

The reasons why go back to the basics, which the filmmakers attend to with consummate professionalism. Justify the exercise. Develop the story in interesting ways that do more than just pad the running time. Cast the right actors. Get a director who can do fun things with both the big set pieces and the smaller dialogue-driven scenes. Good writing, good casting, good directing. All else is details.

That starts with Guy Ritchie, a seemingly surprising choice that actually makes a whole lot of sense. His cockney crime sagas feature clever rascals who live by their wits… a strong fit for Aladdin (Mena Massoud), who remains one jump ahead of the lawmen just like he did in the animated feature. Ritchie’s knack for inventive chase choreography serves him well during the initial scenes, as Aladdin’s light-fingered escapades send him careening around the city with the guards in hot pursuit. We know the songs well enough, but Ritchie’s visual pizzazz lends it a sense of distinctiveness: making it more than regurgitated also-ran of the animated sequence.

That extends to the storyline, which sees genuine development in the right places and brings some complexity to previously underused idea. Princess Jasmine (Naomi Scott) proves the biggest beneficiary, as the evil vizier Jafar (Marwan Kenzari) plots to find the Genie’s lamp and claim the sultan’s throne for himself. The film ups the palace intrigue a great deal, giving Jasmine ample opportunity not only to prove her merits as a ruler in and of herself, but provide Aladdin and the Genie (Will Smith) a golden opportunity for some lively buddy movie antics. Ritchie’s gift for easy banter plays dividends here too, and the new material feels wholly organic with the older framework it builds upon. (Scott and Massoud crackle with romantic chemistry too: the love story sells itself.)

Which brings us to Smith, possibly the most challenging element of the film. Early footage looked… less than impressive, and the prospect of filling Robin Williams’ big blue shoes initially looks like more than the Fresh Prince can handle. The weakest points of the movie comes when he treads too close to his predecessor (“Friend Like Me” is a disaster), but the new material gives him room to maneuver, and he soon develops his own take on the Genie that makes the exercise more than worthwhile.

His partnership with Massoud helps a great deal. The blue CGI sequences often remain too leaden for comfort, but with the two of them together onscreen, the film finds its heartbeat. Ritchie delivers a nice update to the classic Hope-Crosby formula of well-meaning nitwits in costumes sneaking around foreign palaces. It’s a surprising delight, and helps the new content earn its spurs as something worth paying attention to beyond its connection to its celebrated predecessor.

It’s not ideal, and at the end of the day, it’s still operating in the shadow of a better film. But it manages to find its own magic without diverging from hard-core Disnerd expectations, and with Ritchie at the helm, this new Aladdin succeeds as more than just nostalgia. f the film doesn’t quite reach its potential, it still reflects the benefits of technical storytelling care and a dedication to giving the audience their money’s worth. Disney’s live-action adaptations don’t look to stop anytime soon. This one, at least, never makes you regret the trend.