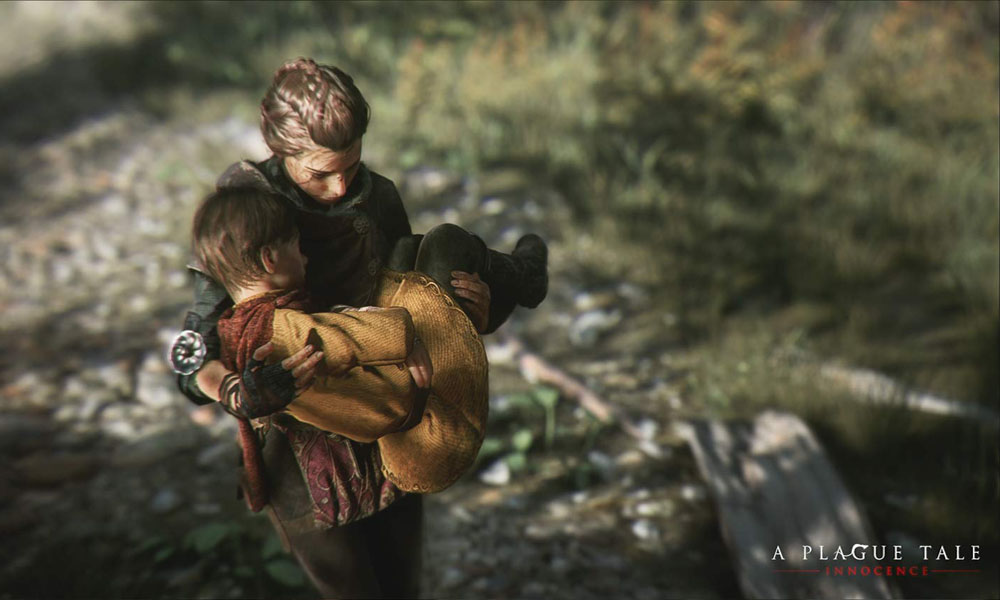 Type of Game: 3rd Person adventure game. A Plague Tale: Innocence (PT:I) plays along a set storyline without the option for much exploring. In other words, it’s a closed world and the story pushes you from one point to another via a series of puzzles and challenges that include (but not limited to) precarious chases through abandoned villages, avoiding legions of voracious vermin, and facing off against mace wielding, inquisition knights. 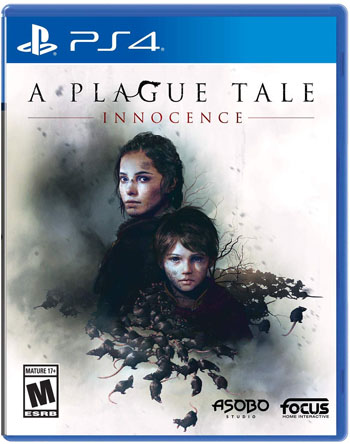 Concept: Basically, an amalgam of fantasy plus historical piece, PT:I initiates it’s story in a 14th century feudal society where a manor lord is found teaching his young adult daughter (Amecia) how to fend for herself in the forests around their feudal manor (serves as a tutorial for the controls). Upon return to the manor, the family and their servants are beset upon by murderous Inquisition soldiers which leads to Amicia (main character) having to escape with her younger brother, Hugo (mysterious child with a mysterious connection to the “plague”) that the Inquisition soldiers, for some mysterious reason, are intent on capturing/destroying. Hinted in the tutorial forest training, there is something seriously awry in the land as a black scourge appears to be warping the vermin into voracious, red-eyed demonspawn intent on rending all life to their bones which makes for some gruesome images throughout the game.

Controls: For the most part, the controls are easy to master but clunky in more stressful and time-constrained situations. The moments when Amicia is called on to fight are easily the least enjoyable parts of the game as the controls are awkward and do not generally respond with the fluidity that one would like in such intense moments. The quickness wherein she shifts from aim to getting her sling set are especially frustrating. Alas, the game is very forgiving in that the (auto) save points are generally often without any limit to the amount of times you reset and get to try again. One gets the feeling that the creators were not trying to create a game that the average game player would have trouble finishing, but rather a game where almost any player, even a novice, could finish with minimal effort. The crafting tool/interface is typical and the resources are plentiful throughout the game. Similarly, it appears the resources become plentiful as if patterned for you to upgrade your weapons/equipment in a forced sequence. This is a drawback due to their being little customization in your ability to create your own unique Amicia character. I imagine the Amecia at the end of my adventure looks very similar to yours and yours and yours. 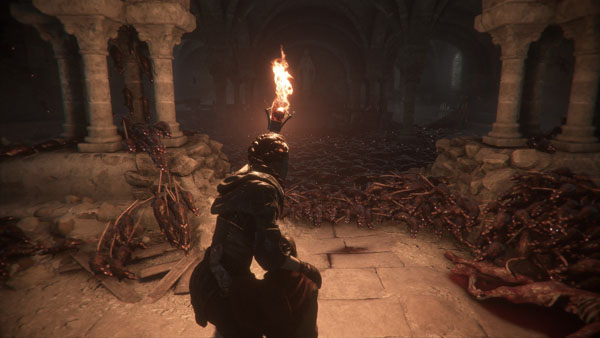 Graphics: Perhaps the greatest compliment I could give to this game are the graphics. Not groundbreaking, but by all means a highlight. The attention given to create a believable 14th century setting is impressive and certainly adds dimension to this game, that could have gotten tedious and downright boring considering the lack of options to explore. There is a story to tell and the graphics do well to paint the picture the creators wanted you to see.

Overall gameplay: This was a fun game to play. I would almost label it more of a watch/play type of game where the enjoyment came mostly on seeing what comes next, rather than what I could create or master on my own. Early on I got the impression the creators were very much inspired by elements in Assassin’s Creed or other similar games and there are moments (navigating a crowd) where that is especially poignant. However, players in search of a more dynamic and “free” experience will be disappointed as this game gives very little opportunity for making your experience unique to anyone else’s. It was a like a Netflix animated movie but I was able manipulate some of the “choose your own adventure” aspects to it. There is basically no replay value to the game as once you’ve finished it, there are no alternate endings or questions unresolved like, “I wonder if the game would have ended differently if I had chosen… X?” Despite its shortcomings, I count my experience as enjoyable, most especially for the storytelling, excellent voice acting (Amicia was especially endearing and her accent perfect), and beautiful (…and sometimes very creepy) landscapes.