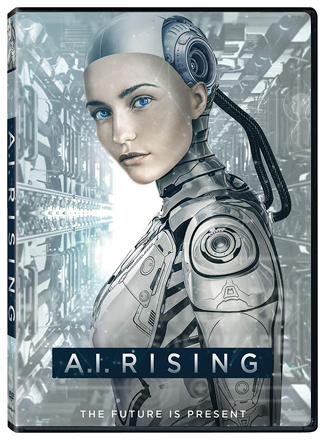 In the future, corporations have exploited every inch of the Earth and have turned their attention to the stars. The Ederlezi Corporation has begun to colonize the Alpha Centauri star system. Their latest mission has them sending an experienced astronaut, used to working alone, and pairing him with a highly advanced female cyborg named ‘Nimani’ (Stoya).

The astronaut, Milutin, uses the programmable cyborg as his personal sex toy but soon becomes bored with the machine’s passiveness. Despite his admitting to having difficulty with relationships during the mission briefing with is boss, he longs for Nimani to think and behave more like a real human. He makes the decision to remove her core programming and rebooting her, but fails to get the results he wanted.

This low-budget trainwreck is a Serbian produced film that has some worthy ideas but is mired in silly and boring melodrama. The bulk of the movie consists of the two main stars just sitting around talking to each other or having sex…and I can’t decide which is more tiresome. A twist about halfway through the film offers no consolation to the viewer, should you be unlucky enough to still be awake.

The “spaceship” while looking interesting from the outside, consist of nothing more than a small navigation control center and utterly featureless corridors making it look like it was filled in an abandoned bunker. When not active, Nimani stands within a small indention in a wall with a light behind her, seemingly her recharging port I guess. The ship also looks impractically large from the outside for just two crew members. And just what was their mission in the first place? That part is never truly explained.

.Deleted Scenes
.Trailer Gallery
.Interview with Stoya
.“Behind the Scenes of A.I. Rising” Featurette
.“A.I. Rising: About the Movie” Featurette