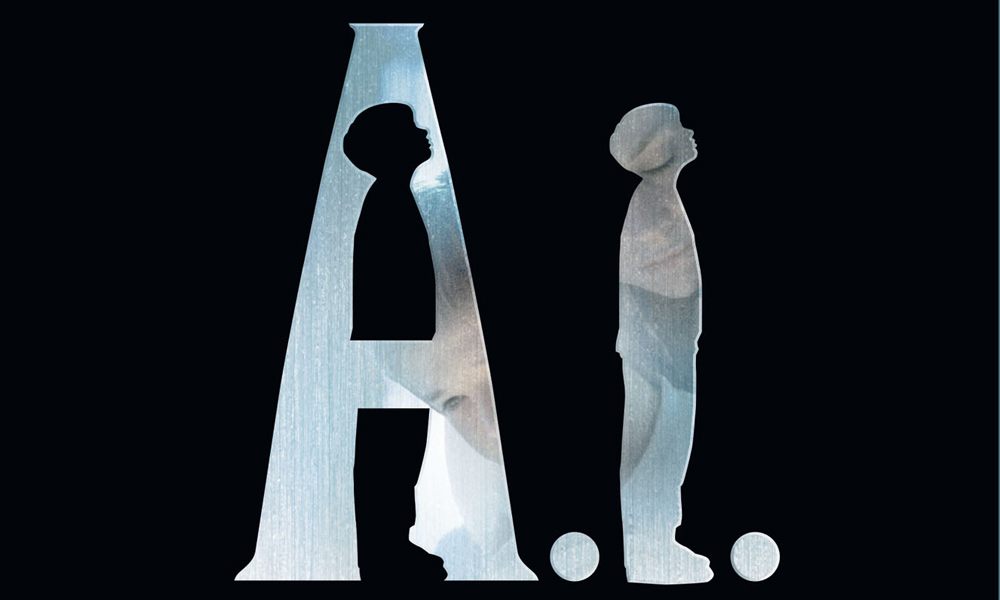 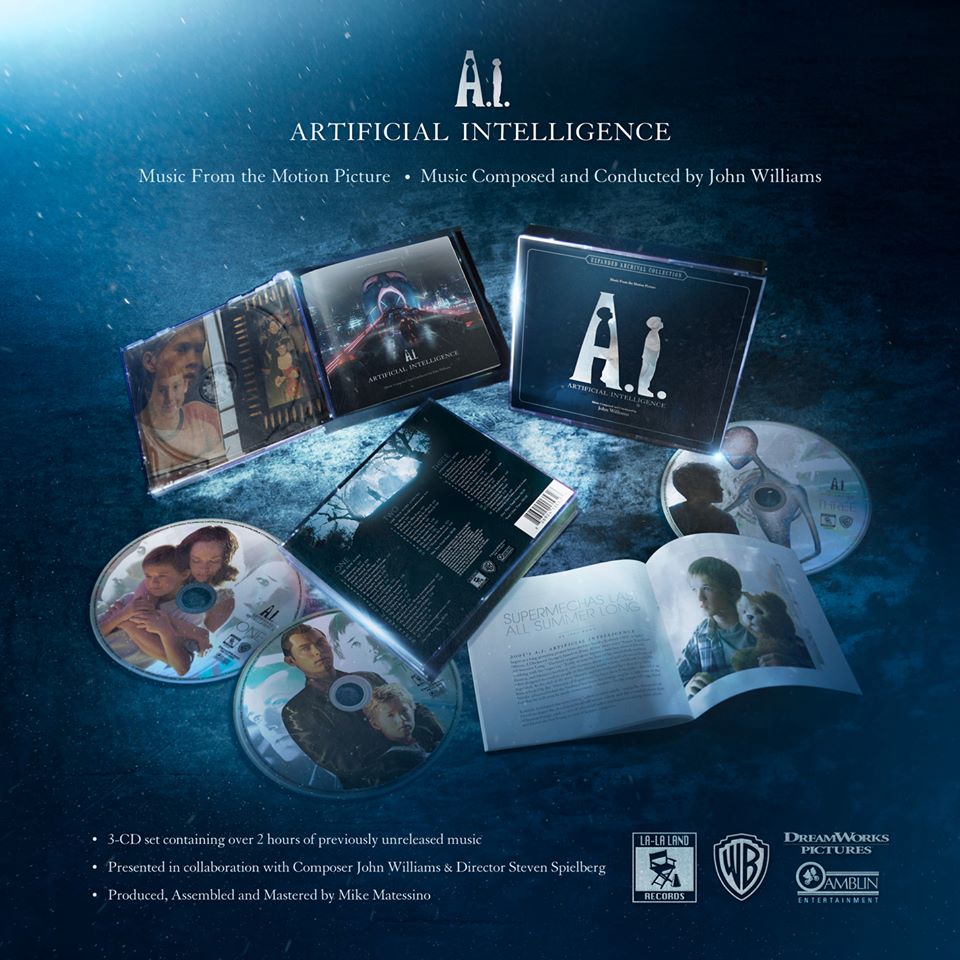 Steven Spielberg’s A.I. Artificial Intelligence is a strange film. Born of two fathers, the late Stanley Kubrick and Steven Spielberg, who spent years collaborating on the project. As a fan of the directors, one can clearly see their trademarks in the film. The opening is ear marked with Spielberg’s touch. Then, once David (Haley Joel Osmet) is forced into the real world, we see Kubrick all the way to the end. One of the many Spielberg staples is John Williams. LA-LA Land Records has just released an expanded score of the film. How much more is in this expanded edition?  The original soundtrack had only 1 disc and 71 minutes worth of music. This latest release includes 3 discs and 3 hours of music.

John Williams is a fan favorite, hands down the the absolute Maestro when it comes to movie soundtracks. His work on Star Wars, Indiana Jones, Harry Potter, Jaws, E.T. and well… I could go on forever, but those are the classics. What about the less appreciated work? One of the issues with A.I. Artificial Intelligence is that the film is very harsh. A young boy (artificial or not, he’s still a boy) is abandoned in the woods and left to his own devices. He looks to become a real boy and seeks out the Blue Fairy. Why? All because he is told by his creator to do so. The ending, though beautiful, is realistic and not a whimsical happy ending. Unlike many Spielberg films, A.I. Artificial Intelligence is not something you want to experience a second time, so why would one want a complete score of the film? Two words: John Williams.

Many would say that John Williams is as identifiable as The Beatles. It is easy to pick out his scores. This is true of his early work. In my years of listening to scores I have noticed that around 1998 Williams starting to change his music. Sure in 2001 his Harry Potter score arrived in classic Williams fashion, but with Saving Private Ryan and Star Wars: Episode One The Phantom Menace he began to diversify. Yes, a pure hymn to the soldiers of World War 2 and a phenomenal score to a lesser Star Wars film mark the change. With his announcement of scoring the next Star Wars film I have gone back and started to re-listen to Spielberg films that didn’t have some the impact on me as E.T., Jaws or the first three Indys. After devouring Minority Report I knew I had to pick up A.I. Artificial Intelligence. The following tracks just floored me.

“Monica’s Plan” (track 15, disc 1). Here, Williams swirls the piano as Monica decides what she is going to do with her robot son. It is a slow build as her plot unfolds. It is dark, yet subtle like a storm about to brew. It is a prelude to David’s nightmare in “Abandoned in the Woods”. Yet despite that being the very next track on Disc 1, I suggest jumping to Disc 3, track 5 for an alternate take. It isn’t as long, but has a sadder feeling, as if perhaps Williams was revealing too much heart in his music for Monica.

“The Mecha World” (extended cut) is nearly 3 additional minutes of music not found on the original soundtrack release. It has a clock-like beat that keeps pace with the entire track as if it were a precision instrument for these mechanical wonders. The original release had this as the very first track. It is strong enough for that placement, but really belongs here on disc 2, in its sequential order.

“Replicas” alternate (track 8, disc 3) is both haunting and scary. This is more of the chorus work that influenced Saving Private Ryan and Star Wars: Episode One. It supplies the perfect solitude that David has, despite Teddy’s company. David can never understand who or what he is. It’s a lonely track, filled with haunting voices, wrapped in a beautiful melody.

“The Bike Hounds” extension (track 6, disc 3) is a great example of not typical John Williams. The track sounds as if it something directly from Eric Serra’s 1997 The Fifth Element score. It has a Middle Eastern influence and would more likely be found in a dance club than a John Williams soundtrack. Disc 3 really is the cornucopia to this set. The next track is “Inside Dr. Know’s”. This beat supplies a campiness that is closer to Danny Elfman’s Pee Wee’s Big Adventure than the man who brought us “The Imperial March”. Yet, before it gets to Elfman-esque, it changes to a Dennis McCarthy’s Star Trek: The Next Generation TV music wonder.

As I mentioned before, I am on a journey of re-discovering the John Williams scores of less memorable Steven Spielberg films. More than likely, I’ll go seek out Catch Me if You Can next. Yet with Sci-Fi flare like Minority Report, A.I. Artificial Intelligence and ten years since the last Star Wars film, I’m more excited than ever to dive back into some new and classic John Williams music this Christmas. This expanded edition of A.I. Artificial Intelligence was a phenomenal treat and a perfect edition to my music library.

To hear sample tracks of A.I. ARTIFICIAL INTELLIGENCE or to buy the soundtrack, follow the link to LA-LA Land Records here.