7 THINGS WE LOVE ABOUT REVENGE OF THE SITH 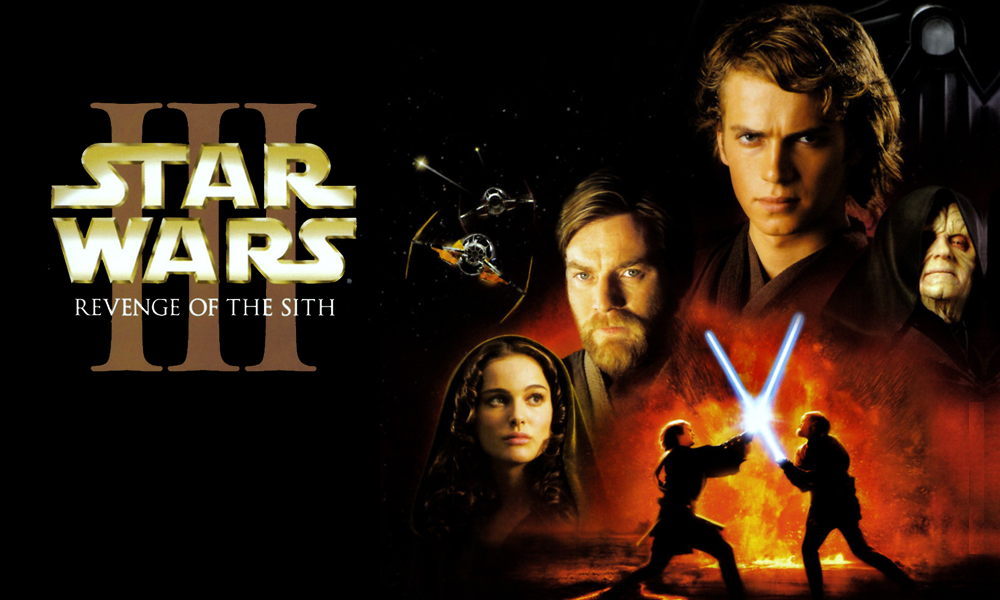 We know. We get it. Prequels = stinky. Message received loud and clear. But not all of us believe that the much-maligned origins trilogy of the Star Wars saga deserves the scorn heaped upon it. They hold more than detractors maintain, and with the Star Wars saga gearing up for the long haul, they offer their share of notable contributions to that galaxy far, far away. Praising its good parts isn’t the same as excusing its bad one – such as the dialogue, the dialogue, the dialogue and the awful, terrible, no-good dialogur – but despite their flaws, the prequels hold a lot to get excited about too, which (like it or not) have become beloved parts of the star Wars canon.

Nowhere is this more true than Revenge of the Sith: arguably the best of the three prequels and certainly the darkest. It never escapes the shortcomings that dogged its two predecessors, but still ensures that the time we spend with it  carries its share of joys. On the anniversary (as well as the anniversary of the much more maligned Phantom Menace), here are 7 Things We Love about Revenge of the Sith.

McDiarmid’s onscreen career remains fairly limited, though his work in British theatre is renowned. He’s living proof that a good actor makes every role remarkable, no matter how small. (Don’t believe us? Watch what he does in Dirty Rotten Scoundrels with three little words.)  He always understood how to express the totality of the Emperor’s evil – the hateful self-satisfaction of a languid, poisonous toad sucking the life out of the entire galaxy – with little more than a tone and a glance.

Revenge of the Sith finally gives him permission to cut loose, revealing Palpatine at his sinister, seductive best. We see how readily he casts his spell over Anakin, and with the dialogue remaining less-than-ideal even at the best of times, it falls on McDiarmid to deliver on the character’s infernal promise. “Is it possible to learn this power?” Anakin asks. “Not from a Jedi,” McDiarmid purrs in response, and we challenge you not to get chills.

George Lucas scuffled to get his prequels rolling, with opening action sequences that never quite caught fire. Third time’s the charm in this case: throwing us into the midst of a world-spanning space battle over the towers of Coruscant that captures a few echoes of what these movies are supposed to feel like. It ties into Lucas’s strengths as a filmmaker: motion, speed and the sheer scope of the universe he created out of whole cloth.

It also gives us an important moment in the development of the characters. Though their dialogue clunks as hard as ever, but you get a better sense of the camaraderie between Anakin and Obi-Wan, as well as Anakin’s growing frustration with what he feels to be unduly stifling rules. The moments pass quickly, but are important, and for once Lucas lays off the sturm und drang surrounding them long enough to let them breathe.

“It’s the Lightsaber That Says ‘Bad Motherf***er’ on It”

The prequels have a lot of problems. Samuel L. Jackson is not one of them, and his stalwart, implacable Jedi finally gets a chance to show us what he can do. We got a taste of Mace Windu’s mojo in Attack of the Clones, but he didn’t face down an opponent worthy of him until he crossed lightsabers with the Emperor himself… and came within one galaxy-shaking betrayal of taking Palaptine down for good. When Anakin turns on him and he tumbles to his doom, you feel the foundations of the Republic collapsing with him. “How are we gonna save the galaxy without him?” a tiny voice asks, and ominously, there is no immediate answer.

Lucas’s central problem as a filmmaker is that he often lets the big picture blind him to the smaller pieces necessary to make the story compelling. But looking at the fall of the Jedi here – seeing Palpatine’s decades-long plot some slowly, inexorably together – the full tragedy of it becomes clear. We see the Jedi stretched to the breaking point, then the Emperor deliver a carefully timed blow to shatter them for good. Unlike the more personal elements of the story, it works amazingly well: conveying the loss of the galaxy’s noble defenders with the gravitas the moment requires.

Star Wars never lacked for proper villains, and the cybernetic Richard III from Revenge of the Sith gets overlooked too often when discussing the great ones. His hatred of the Jedi remains surprisingly distinctive from the other baddies in the series, as well as giving Obi-Wan a worthy opponent to keep him distracted while Anakin falls from grace. The Star Wars saga thrives on little moments, and the point where Grievous starts spinning those lightsabers like a buzz saw is not lightly dismissed.

“So Then I Threw the SENATE at Him!”

We weren’t getting out of this saga without watching the two unquestioned masters of the Force – Yoda and Palpatine – throw down. The battle didn’t disappoint, raging into the giant dome of the Senate itself, and topped by the Emperor hurling Senate seats like hailstones down on his opponent with cackling glee. Subtle, it was not, but it definitely elicited its share of squeeing noises from the Star Wars faithful. It was so strong, in fact, that it ended up eclipsing the much-vaunted battle between Anakin and Obi-Wan that it accompanied. The two Jedi get lost in the scenery of their conflict; Yoda and Palpatine transcend it.

What would Star Wars be without John Williams? Mark Hamill called him the most important creative voice in the saga after Lucas itself, and without his iconic work on Episode IV, Star Wars might never have progressed beyond that first movie. His compositions hold the prequels together through sheer force of will sometimes. Revenge of the Sith calls upon him to blend the prequel’s themes with existing work from Episodes IV-VI, and he comes through with flying colors: delivering the emotional punch that the screenplay sorely needed time and time again.

Case in point: the battle between Anakin and Obi-Wan, which actually ranks as one of the weaker duels in the Star Wars movies. It should stand as an emotional wrecking ball, but Lucas allows the overwhelming spectacle of their surroundings to bury the emotional punch of life-long friends turning on each other. Williams rescues the moment – and a number of others – and conveys the operatic finality of Anakin’s fall with every note.