It took me a bit to recall this film was an anthology. There is no reoccurring concepts or any really definitive cut-off 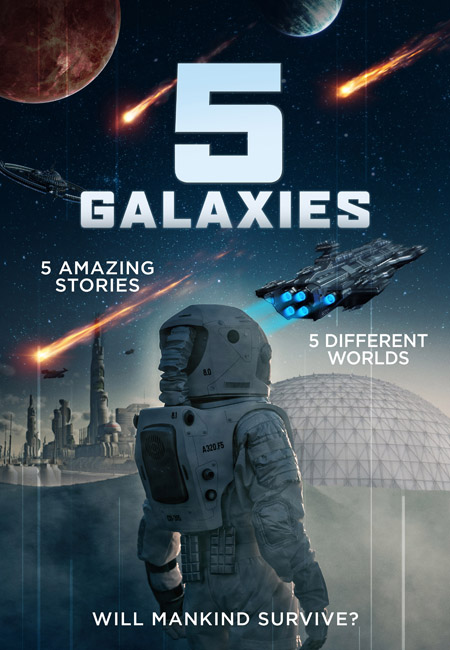 point to the ‘stories’ being told. When I saw the dates I figured initially they were dividing lines in the same storyline over a period of many years, not that each divide had NOTHING to do with the previous vignette.

5 Galaxies is a bit like the movie Creepshow where a bunch of directors and writers and actors put on mini productions which follow each other until the curtain. In Creepshow for instance there would be a story about a zombie and then a story about cockroaches, but the only uniting aspect of these self-contained tales is the notion of them being adaptations of a comic book as it’s being read in a frame story.

5 Galaxies has no frame story, and it’s a bit disorienting. The title should probably have given away the anthology aspect of the film, but at no time does a unifying character or theme or bridging idea pull these diverse mini-movies together. There is supposedly the consolidating essence of ‘stories about technology’ but that’s a pretty flimsy groundwork to build from. And it shows. One of the reason I figured these scenarios bled into each other is their lack of definitive endings and their universal in-habitation by unimpressive actors sputtering stilted dialogue.

I could easily believe each sketch took place subsequently and I kept waiting for something from previous stories to crop up in later ones because some just conclude so abruptly they feel not open ended but unfinished. When the woman who is filling out paperwork for the longest time and then the reason for this is dropped like a toothless punchline I felt like maybe since nothing had really happened this would contribute further down the line. Nope.
5 Galaxies has stories set in the near future, distant cyberpunk future, a post-apocalyptic future and on other planets. And each story is populated by wooden actors reading wonky dialogue and obsessed with their own feelings. It does switch up venue quite a bit but the budget is all too apparent in the aesthetic.

A small set with green-screened windows passes for a hovercraft, and you can tell it’s a wealthy guy’s hovercraft because the windows have cloth curtains. It’s a cyberpunk future in one story because everyone wears flashing clothing accessories. It’s a post apocalyptic bunker in another because everyone is a bit scuffed and taken to wearing leather shoulder pads. Not a lot of original visions of the future here. Near future looks like right now only with some holograms, far future has zippy flying cars and big buildings, post nuclear future has deserts…etc. It’s not so much a showcase of innovation as a series of homages to popular genre films with a smaller cast and crew.

That’s not to say the effects are bad. If the costumes are a bit cheap looking, the computer animation is solid quality with some of it looking on par with bigger budget productions. There is a pretty lousy looking hurricane at one point but that’s the exception instead of the rule. I have no idea where the promotional images for this movie keep showing off the CGI robot which shows up only briefly and barely has anything to do with the episode it appears in, and is not that great an example of the effects work (kind of jank).
I thought one sequence involving a holographic lock was extremely impressive as the camera would change perspective and the lock, although it was literally not truly on screen, seemed to resize appropriately and interact smoothly with the characters.

But there isn’t a single character or scenario which will stay with the audience I can see. There’s some potential for stories being told but they are too derivative of other works and come and go too quickly to sink in. It doesn’t help that although the cast for each story is clearly doing their best this is more like a group of community theater performers with their first big break, sniffling and looking stern with great conviction but not a lot of convincing. The actors are pretty darn young for the most part so it’s not so much snapshots of life in other times as it is teens and early adults emoting through monologues with different backdrops. 5 Galaxies excitedly claims so veteran actors are involved, but they seldom have anything to do. There’s one cameo which begins and ends with the actor adjusting his sleeves.

It all felt like a loose collection of proofs-of-concept rather than any kind of coherent vision, and the proofs were practically plagiarized. I guess it’s impressive for an obviously limited team to put together something this competent, but when you aren’t given leeway to care you don’t end up doing so. Could have made for a handful of mildly entertaining episodes for an amateur web series. As a movie it’s a bore and a chore, throughout five galaxies (apparently).