When Good Ghouls Go Bad is a 2001 made-for-TV movies that debuted on Fox Family.  Danny Walker and his father James have just moved to the small town of Walker Falls, MN from Chicago where his father intends to re-open the family’s chocolate factory.  They are staying at the home of James’s father Fred (Christopher Lloyd), a lovable oddball who is known throughout the town as “Uncle Fred.” 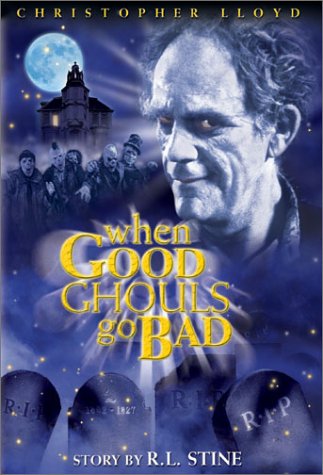 Danny is disappointed to learn that the town no longer celebrates Halloween.  Years earlier a teenager named Curtis Danko died in a kiln while working on a statue.  Legend has it that he cursed the town and would come back to destroy them if they ever celebrated the holiday again.   To this day the statue he was working on has remained covered and never seen by the town. James is hoping to use a Halloween celebration to re-open the factory but finds the townspeople still too afraid of the legend.

When Uncle Fred is killed in an avalanche of pumpkins, his love of Halloween causes him to come back to life as a zombie, along with many of the town’s other deceased residents including the mysterious Curtis Danko.  The zombies, seemingly under the control of Danko, force the town’s residents to gather at an old Victorian mansion.  Danko finally reveals himself and the truth behind the town’s curse.

The film is based upon a book by R.L. Stine of Goosebumps fame and essentially plays like a full-length episode of the Goosebumps TV show.  While it is suitable for viewing by the entire family, there are some scenes, particularly when the ghoulish Danko reveals himself that might be a little too intense for younger children.  The film also features a good deal of humor, mostly in the form of Christopher Lloyd who is his usual manic self and gives an energized performance.  Joe Clements also shines as Coach Kankle, the town bully who leads the charge against James’s attempt to bring Halloween back the town.

When Good Ghouls Go Bad is a wonderful and imaginative Halloween film.  While it is funny and moderately scary for kids, it also has a lot of heart and Halloween spirit. It was shown regularly during the Halloween season for a number of years but I have not seen it recently.  It was released on DVD, however, in 2007 so is readily available.