LATEST
Home Horror 31 Days of Horror: The Woman in Black

31 Days of Horror: The Woman in Black 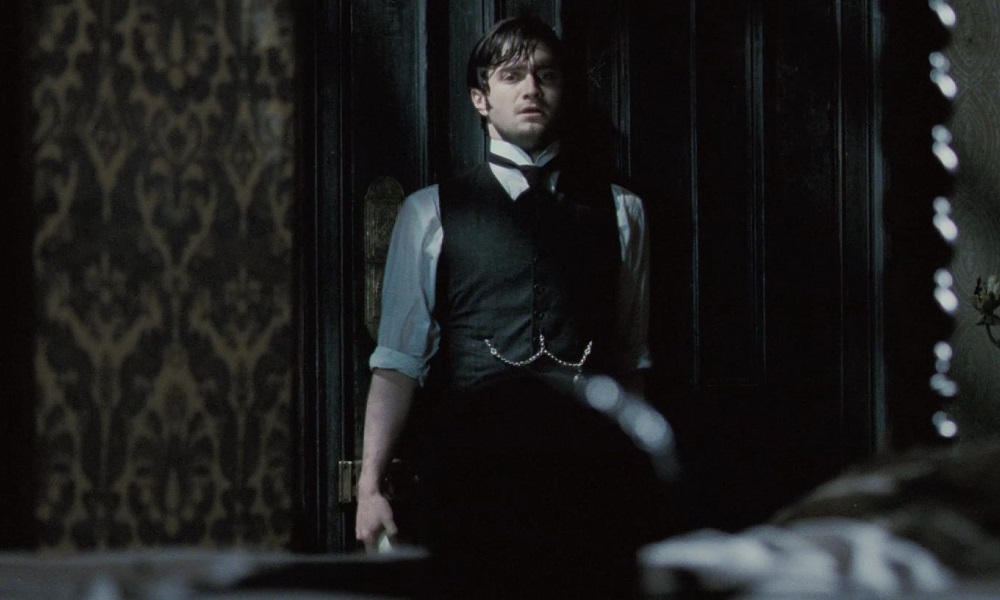 Sharp eyes will spot the name “Hammer” in  the opening credits for The Woman in Black, which should raise the spirits of even the most despondent horror fan. The first effort in decades to bear that title has a huge reputation to live up to, even with the benefit of modern budgets and technology. Not only does it serve as a brilliant reminder of the legendary studio’s heyday, but it actually enhances and augments the things that made Hammer so great. Gothic, atmospheric, and wearing its old fashioned nature as a point of pride, it demonstrates just how balls-out scary you can be with a supposedly mild PG-13 rating.

In addition to its classic roots, it also owes a curious debt to the Paranormal Activity series. Like them, it bets everything on purse stimulus response: an escalating series of “boo-gotcha” moments designed to get us where we sleep. Unlike Paranormal Activity, it marries the technical scares to a reliable story, helped by a fine lead performance from Daniel Radcliffe (who clearly hopes to put his wizarding past to bed with his role here.) He plays Arthur Kipps, a young barrister with a dead wife and a four-year-old son, desperate to maintain his position lest his debts finally overwhelm him. In order to keep it, he travels to a rotting mansion in the English countryside, whose owner has passed and left a mountain of paperwork to deal with. Naturally, the place has a past, which the surly villagers in the local pub mutter about over their beers. It’s not content to stay quiet either, as Kipps learns after he’s bolstered himself in the mansion with no ready means of escape.

The cobwebs-and-weird noises tactic – beloved by carnival spookhouses from time immemorial –  shouldn’t work as well as it does. But director James Watkins approaches the mechanics of his task with a relish rarely seen in more mundane horrors. The clichés are there: everything from creepy mechanical monkeys to a sudden blast from the brass section on the soundtrack. Yet he consistently finds innovative ways to frame and deliver it, keeping newbies on the edge of their seat while impressing veteran fans with new ways to deliver old favorites. The trick works far more often than it has any right too, and as the danger goes from old wives’ tale to active menace, the film’s gut punches actually increase their potency.

Watkins also tricks out the storyline with surprising expertise. There’s a lot of backstory, typically delivered in big greasy chunks with as little finesse as possible. The Woman in Black trusts in Kipps’s task to deliver the particulars, using documents to reveal details about the dark figure hovering in the shadows without forcing the actors to blurt it out in awkward conversation. The sets and costumes readily evoke the Hammer tradition as well, and the contemporary filmmaking skills on display accentuate the same creepy stairways and passages that Christopher Lee once stalked with impunity. Radcliffe ties it all together in a neat little bow; the story saw life as a stage play before it became a film, and the actor’s theatrical affinity works exceptionally well within these confines.  He would have been quite at home with Lee and Peter Cushing back in the day, a distinction he should wear with honor.

Few genres cannibalize their past the way horror does, and every hard-earned gem invariably produces oceans of derivative crap in its wake. Hammer films fell into the latter category as often as the former, a status that The Woman in Black deftly avoids through sheer dedication to its craft. Its intelligence compliments the simple purpose of scaring the crap out of us, refusing to pander and yet honoring the tropes of horror movies past. 21st century audience members whiplashed between the harsh extremes of torture porn and the gutless non-scares of Twilight will be relieved by the sharp middle ground The Woman in Black cleaves. It follows a time-honored pattern not out of laziness or studio-dictated formula, but because that pattern can still terrify us in the right hands.