31 Days of Horror: The Monster Squad 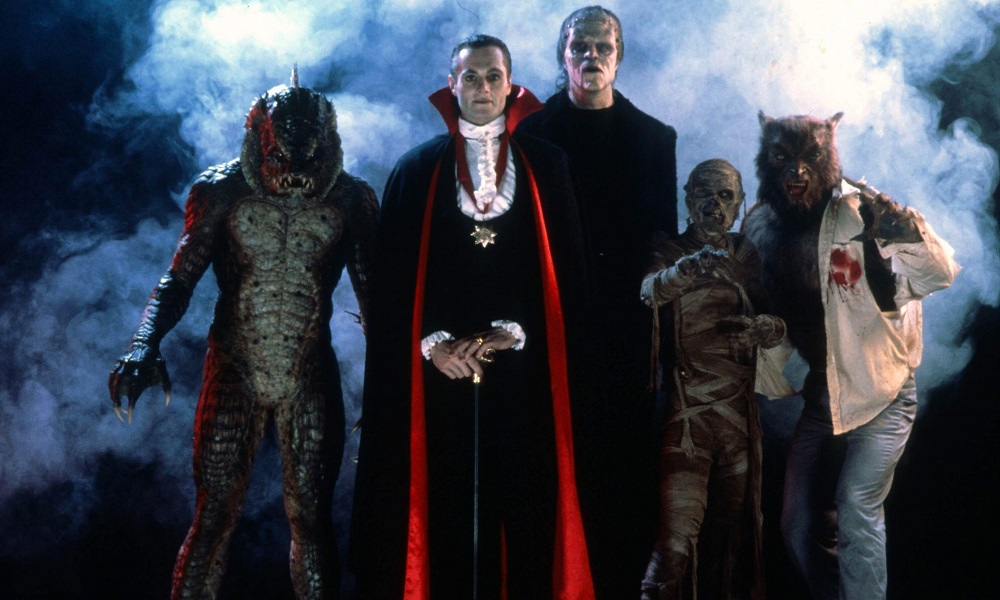 Nostalgia can go a long way, especially on Halloween when fond memories of trick-or-treating and our first exposure to real horror movies can give the holiday a distinctly rose-colored feel. The Monster Squad isn’t a great film, but it trades wholesale on that nostalgia, and as a gateway drug to more grown-up horror’s, it holds a sweet and charming appeal. Drenched in 80s culture and with a debt to the influence of Joe Dante, it bombed when first release, but – like a lot of films in that era – found a new life on home video.

Watching it again, it’s clear how much it depends on fans of a certain age… and how its flaws actually add to the fun. Its heroes are a gaggle of tweener boys who hang out in a treehouse and geek out about classic monster movies. They’re generally regarded as losers, though their school’s resident tough kid keeps them protected in exchange for using their treehouse to watch the local hottie undress across the street. But their credentials get put to the test when Count Dracula (Duncan Regehr) arrives in town with his monstrous buddies in search of an amulet that will allow them to cloak the world in darkness. (Drac’s always the troublemaker in these scenarios, isn’t he?)

The kids themselves are nothing special: typical freshly scrubbed Reagan-era protagonists who lean heavily on stereotypes and work a little too hard to be appealing. But they make agreeable audience stand ins, and when the forces of darkness assemble, they’re plucky enough to credibly fight back. The real juice comes with the monsters: patterned after Universal’s classics and taken seriously as threats despite their general kid-friendly facades.

Director Fred Dekker treats their various moments with respect and reverence, never as the subject of a joke, and that affection helps temper the scarier stuff without turning the monsters into straight men for the kids. The Count puts the moves on a trio of virgins offscreen, for instance, turning them into his vampiric brides, for instance, while the Wolf Man (Carl Thibault) frantically warns people what he’s capable in the futile hopes that someone will believe him. They don’t and things get ugly.

Nowhere does this prove more important than with Frankenstein’s monster (Tom Noonan), reluctant participant in Drac’s plan and evincing all the tragic dignity one expect from the character. He befriends one of the hero’s little sisters in a lovely riff on James Whale’s famous flowers sequence from the 1931 film, tempering what could have been a schmaltzy moment with some real tenderness. (There’s also a quiet dig against the protagonists’ Boys Only policies: the girl, desperate to join their club, has to produce an actual living monster to do it.)

The ultimate showdown is about what you’d expect, though it shows some flair from time to time and our heroes come up with some reasonably interesting ways of getting rid of their undead nemeses without the screenplay tilting the odds too far in their favor. Their knowledge of old monster movies helps, of course, and they find an unlikely ally in the form of a strange old German man in their neighborhood (Leonardo Cimino) who knows a few things about real monsters as well as translating a helpful book of instructions.

Credit for such notions, and for the way the movie subverts our expectations just often enough to avoid slipping into cliché, comes both from Dekker and his co-screenwriter Shane Black, who knows how to write good dialogue and who was enjoying a meteoric rise to prominence following the success of Lethal Weapon a few months earlier. Their efforts help the film thrive as a time capsule of the era, and its charms work best in that context. (Everyone breathed a little sigh of relief when plans for a remake were scuttled last year.) Its slight nature exemplifies the kind of material filmmakers were churning out back then, marked by a fondness for older ideas and a way of bringing them to life that felt perfect for the time and place it was occupying. No one will mistake The Monster Squad for a great film, but it’s certainly an enjoyable one, and for families looking to enjoy the holiday with young ones in tow, it has the right combination of elements to keep everyone smiling. Genuine fun can be in short supply with horror movies sometimes, which makes efforts like this one all the more appreciated.