31 Days of Horror: The Devil Rides Out 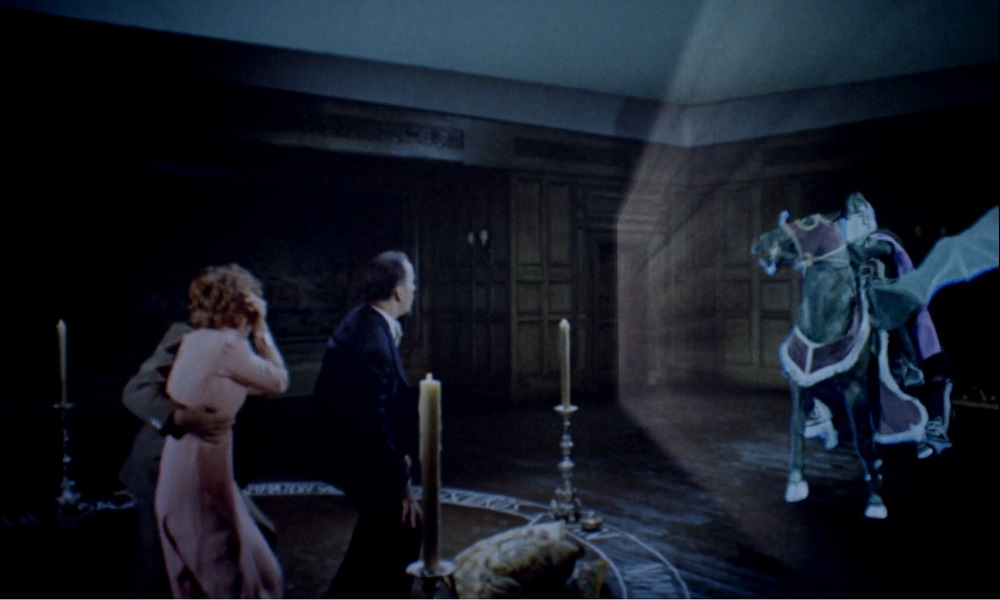 The peculiar charm of Hammer’s classic horror movies shows itself in their combination of earnestness and absurdity. With tight budgets and truncated shooting schedules, they elevated their threadbare terrors with melodramatic flourishes, pushing through the intensity of emotion in order to give their clunky sets and costumes some weight. They could get pretty ridiculous at times, but even at their worst, they held a certain appeal. And when their formula worked, as it did more often than not, you could sense something truly unsettling beneath the bombast. The frights carried weight that balanced against the kitschy methods to evoke them, and because they were so reliable in their delivery – aided by yeoman directors like Terence Fisher and backed by performers like Christopher Lee and Peter Cushing – then even the silliest moments became delightfully endearing.

Nowhere is this more true than in the subgenre of Satanic movies, of which The Devil Rides Out is Hammer’s purest example. The Devil can get pretty cheesy if you let him: pentagrams, black masses and a generally overheated tone that turns him from the ultimate monster into a Halloween joke. It’s no fluke that the best Satanic movies out there (The Exorcist, for instance) ratchet all that back in favor of a more grounded tone. But Hammer, and The Devil Rides Out in particular, double down on the notion: embracing the sheer tackiness of it all and somehow carrying it across the finish line on pure unbridled chutzpah.

It doesn’t hurt to have Lee as our guide, playing the hero for once and making sure we can’t take our eyes off of him. As the Duke de Richleau, crusading occultist out to stop all things Anti-Christ-y from infecting England’s fair shores, he becomes a one-man exposition machine, reveling in the minutia of witchcraft and spiritual summonings with nary a twinkle to let you know that he’s in on the joke. Hammer films rarely waste time, and he quickly finds himself tangling with an infernal coven in the British countryside, which has targeted a young friend (Patrick Mower) being inducted into their ranks. Turns out, they’re awful keen on keeping the lad in their little club, pitting Richleau and his friends against an increasingly gruesome series of warlocks and boogeymen in the service of Señor Beelzebub.

Fisher directed this one, and from the beginning, he has to wrestle his way past the mountain of exposition that pretty much constitutes the film’s running time. In that endeavor, he leans completely on Lee, who spells out each and every Satanic trope (and the various means to combat them) like the consummate pro that he is. The old cliché about being happy to watch a great actor read the phone book for two hours has never been more apt. We basically get a rundown of half-baked pseudo-occult tidbits from start to finish, but in Lee’s hands, we can’t take our eyes away.

The screenplay, written by the legendary Richard Matheson, ensures that he never has to stumble over his lines, and just when we think the film has gone off the rails, Fisher steps to the forefront and gives it a swift kick in the ass. Every fifteen minutes or so, he arranges for a little scare: something quickly created and quite cheap by today’s standards, but which carries a weird power to unsettle us just when we think we’re above it all. It’s a deceptively simple-looking trick, one that Fisher deployed time and again for his bevvy of Hammer classics. Here, it serves to rope-a-dope us a little bit, and while it doesn’t upend the overall campiness, it takes us by surprise just often enough to still the laughter in our throats.

The Devil Rides Out benefitted from some exquisite timing, beginning production around the time the novel Rosemary’s Baby was published and hitting theaters just a few weeks after Roman Polanski’s masterpiece of an adaptation was taking the genre by storm. Truth be told, it didn’t need such a boost. It works in the same vein as all of Hammer’s best films: aware of its ridiculous side and embracing it rather than trying to deny it. The result make for plenty of camp fun, to be sure, but they also add some genuine scares to the mix, summoned on a microscopic budget and depending on Lee’s irrepressible ace in the hole to see the whole thing through. Hammer has been better on occasion, but rarely with such potentially disastrous material and never with the confidence and verve it exhibits here. Satanic movies are a pretty silly lot, a handful of exceptions notwithstanding. The Devil Rides Out agrees wholeheartedly with that estimation… and then swiftly proves that “silly” and “scary” aren’t necessarily mutually exclusive terms.