31 Days of Horror: The Descent 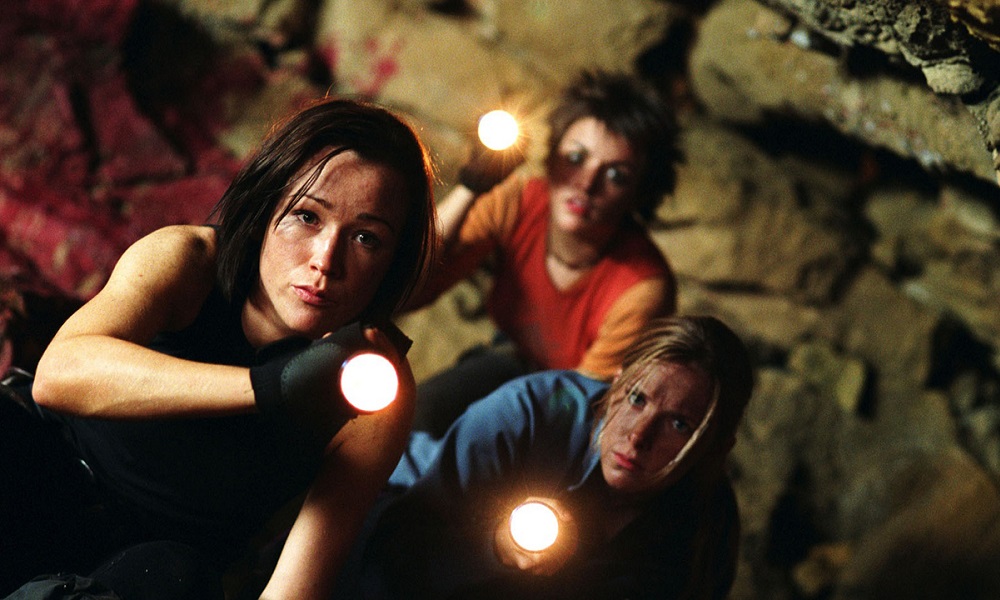 Like most critics, I pride myself on being cinematically unshockable (when you see enough “unexpected” surprises, they start to advertise themselves from miles away) and yet there was a moment in The Descent that made me jump 10 feet in the air. I spent the rest of the movie clinging fearfully to the air ducts; the ushers had to fish me down with pool skimmers after the closing credits. Such is the strength of good filmmaking.

Marshall put himself on the map with 2002’s Dog Soldiers, a nifty little werewolf film whose excellent sense of craftsmanship more than compensated for its cash-strapped monster effects. He repeated the trick here, only this time he adds a considerable amount of psychological depth without losing any of the jolts and scares. His subjects are a sextet of female extreme-sports fanatics whose annual trips always entail (to paraphrase their leader) “a little genuine risk.” This year, they’ve traveled to the Appalachian Mountains to explore an underground cave, one that no map has yet outlined despite what organizer Juno (Natalie Mendoza) has told the park service. Once they get down below the earth, of course, they find that they’re not alone. Though blind and sun-starved, the darkness there has teeth… and it soon acquires a taste for reckless tough grrl.

Not so long before this film, an all-female cast would have been relegated to the slumber party or the sorority house, where they could shriek and cower while the monster du jour hacked them to bits one by one. The Descent officially declares that sexist cliché dead for all time. Its heroines are the spiritual daughters of Ellen Ripley, about as apt to hide from danger as a drill sergeant on the exercise course. Though several are simple ciphers, Marshall’s script invests the core trio with a surprising amount of complexity: particularly Juno, who initially appears as a thoughtless alpha dog, but slowly reveals depths of both heroism and cowardice that develop far beyond her one-note beginnings. A similarly nuanced figure emerges in Sarah (Shauna Macdonald), who begins as a wounded bird recovering from the death of her husband and daughter only to blossom into a ferocious and surprisingly scary force of vengeance by the final third.

And just as films like Deliverance explored the darkest corners of masculinity, so does The Descent deliver a sobering but intense treatise on female identity. The “monstrous feminine,” a routine cornerstone of horror-film subtext, comes roaring to life as Juno and her companions stand eyeball-to-eyeball with stark Darwinian nightmare. The notion of women’s empowerment has rarely seen a more fascinating crucible; such figures are usually limited to a single redemptive character who rises to the challenge only after her various social defenses have been stripped away. The women here clearly have no need of protection, and their ferocity doesn’t emerge through horrifying circumstance: it was there from the start. Marshall punctuates the womb-like visuals of the cave with a few obvious birthing metaphors, and pushes the horror/ecstasy of motherhood a little too heavily. But the concepts hold water fairly well, as does the chilling realization that, like their male counterparts, even strong women have all-too-human limits.

On a simpler level, it’s scary as shit. The underground setting is supported largely by chicken wire and string, yet Marshall knows how to make the most of his assets, transforming the clunky sets and passable makeup into a landscape of white-knuckle fear. The first half sticks to straight wilderness survival, as a cave-in traps the spelunkers under a mile of rock, forcing them to seek a way out with severely limited resources. Though straightforward and simple, Marshall orchestrates it so effectively that he can save the big surprises for the second half, when the film’s real menace comes out to play. The shocks occasionally stray into the derivative — elements of The Blair Witch Project hang uncomfortably in the air, and a few clichés mar the proceedings every now and then — but they never run out of steam, and you rarely see them coming before they hit you full in the face.

In both that sense and on more esoteric levels, The Descent represents one of the true joys of moviegoing. Here’s a film that lacks a huge star, receives comparatively little press coverage, and has a budget that probably wouldn’t pay for George Clooney’s wardrobe trailer. And yet through the simple use of good technique, along with a little imagination and a commitment to the project’s potential, Marshall makes it bloom like a rose in the desert. As a genre film, its fan base is limited — not everyone enjoys the troubling currents such movies sail, and have no doubt: the Grim is on full display here. But as a creative exercise, it’s easily the match of any horror movie yet made. Whatever the type, whatever the genre, few films parlay their assets so well… or reap such frightfully powerful rewards.