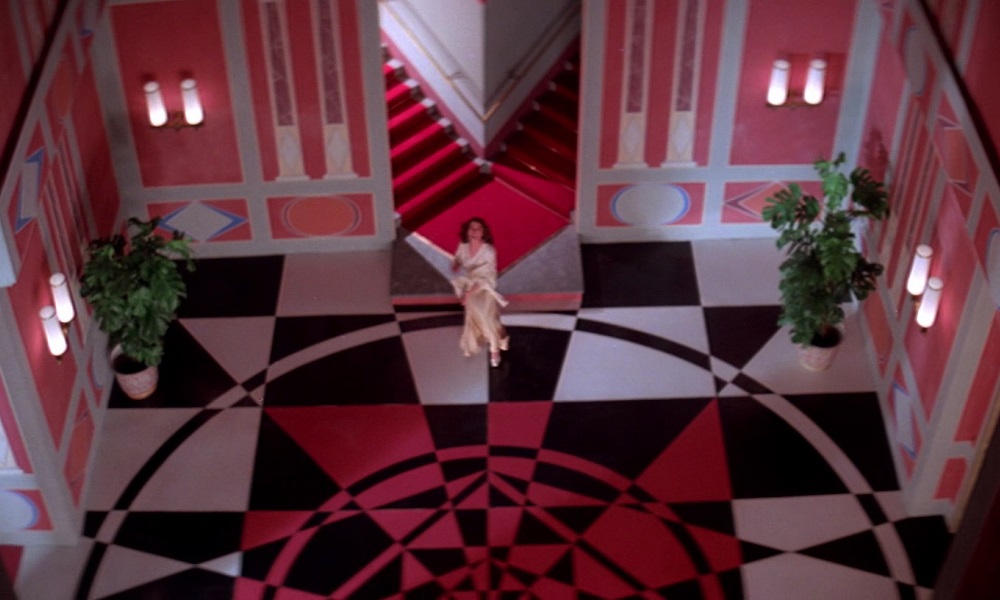 Edgar Wright summed up the experience of watching Suspiria with his typical insight. “It’s like a dream you’ve had when you’ve eaten too much cheese.” We often liken the movies to a dream state, staring up at those visions on the screen in passive wonder, but few films evoke that state more effectively or memorably than this one. In plot terms, it doesn’t make much sense: following a young American girl (Jessica Harper) to a German dance academy that actually serves as a front for a coven of witches. Once you have the basics, you need to kick sanity and logic to the curb… which is part of what makes the movie a horror classic.

Director Dario Argento concerns himself less with plot and narrative than with mood. We know that something is terribly wrong with this school and we sense that Harper’s young protagonist is in some form of mortal peril, but whenever we get close to the specifics, they slither away with a sinister chuckle. The effect leaves us drenched in surreality: unbalanced, disturbed and convinced that we’re in the hands of a certified lunatic.

Thankfully, Suspiria gives us plenty to chew on in the meantime, starting with the art direction and cinematography that combines mod designs with pure nightmare material. The cavernous rooms in the academy resemble Technicolor fever dreams, while the forest outside stems straight from the Brothers Grimm. The legendary soundtrack from Goblin gets under your skin immediately, aiming to unsettle us at the fundaments before the movie goes to work in earnest.

The resulting atmosphere is at once subtle and brazen. It pounds us with meaning while letting its quieter notions slowly seep into our subconscious. When blood spills – and you can be sure that it does – it follows physical laws never seen on Earth, but which feel right at home in this upended funhouse. All of it works to create the feeling of a dark fairy tale, taking place in a world we only know in passing, but sense instinctively whenever we close our eyes.

That allows the grisly set pieces to hit us far harder than a less skillful film could ever dream of. The sight of a blind man savaged to death by his own guard dog works well enough of a visceral level, but the concept is so fundamentally disturbing that our minds rebel without excessive blood or gore. It’s almost pornographic, borne the shoulders of a filmmaker who understands how to deploy excessive style without disrupting our fascination with the story. He hooks us fast and holds us tight, even as Harper seeks the answers to a mystery that defies explanation. By keeping us off-balance in every conceivable way, Argento leaves us wide open for his various jabs and rabbit punches, which he deploys with the precision of Hitchcock. (The showcase moment, involving a girl being hanged from a stained glass window, lingers as much for its bizarre staging as its horrific payoff.)

We rarely know exactly what’s going on, but we want no part of it regardless… and yet Suspiria is no more interested in showing us the exit sign than it is helping Harper’s frightened ballerina escape. We’re stuck in it together with her, forced to play an insane game where the Jungian Other writes all the rules. We emerge from the experience fundamentally shaken, but convinced we’ve experienced something that no other film can produce.

And if Suspiria merely coasted on its novelty value, it wouldn’t merit that kind of praise. But Argento doesn’t limit himself to freak-show theatrics, and his skill as a director comes with the absolute fearlessness of the totally deranged. As I said at the beginning, the film is unparalleled in evoking a dream state, but it also works in the opposite direction. Don’t be surprise if it brings out the Weird in your subconscious, complete with sleepless nights and the kind of haunting images that don’t go away once you open your eyes. That is the essence of horror movies: what gives them their power and what helps them endure far longer than many of their so-called cinematic betters. Suspiria ranks among the absolute elite: its unique qualities leaving us shaken, disturbed… and quietly wondering when we can see it again.