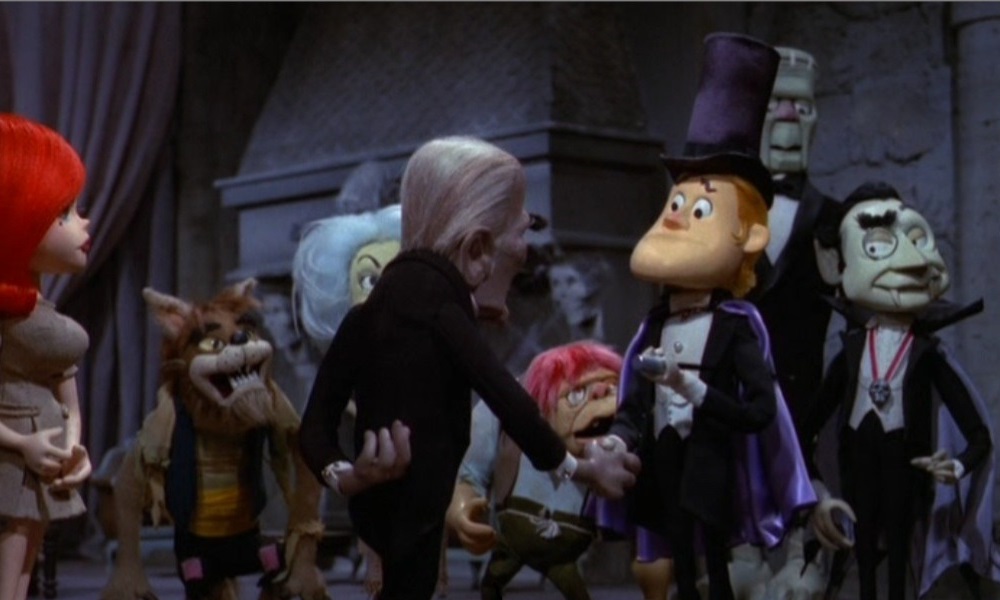 Most people associate Rankin-Bass animation with the holiday season, thanks to their Rudolph and Frosty TV specials. But they didn’t limit their efforts to Christmas. Mad Monster Party (or Mad Monster Party? if you’re a purist), a feature-length homage to all things that go bump in the night, makes a perfect Halloween treat for those who prefer their horror on the sweet and friendly side. It’s actually fluffier than their Christmas specials, despite the longer running time, and leans heavily on the novelty value of the stop-motion animation style. But within that framework, its charms prove boundless, and if you prefer your ghosts and goblins without the accompanying nightmares, you simply can’t do better. (It even proves gentler than that other animated horror classic The Nightmare Before Christmas, which owes it a staggering debt.)

Of course, they do themselves a favor by putting one of the all-time great boogeymen front and center for the fun. Boris Karloff lends his voice and likeness to the irrepressible Dr. Frankenstein, now conducting his work on a secluded tropical island and serving as the chairman of the world’s various Things That Should Not Be. His monster serves him faithfully, of course, along with the monster’s mate (voice and likeness by Phyllis Diller) and a Peter Lorre clone named Yetch. Stacked redhead Francesca (voiced by Gale Garnett, who could give Kathleen Turner a run for her money in the sultry department) acts as his secretary, while an army of ghouls and skeletons perform the sundries around his castle.

But the good doctor isn’t as young as he used to be, and the time has come to name a successor. So he invites the greatest monsters in all the world – Dracula, The Wolfman, Doctor Jekyll and Mr. Hyde, and a bunch of other folks whose names you probably know – over for the party to end all parties. He also adds a ringer: his nephew Felix (voiced by Alan Swift, who also handles the entire supporting cast), a nebbish hypochondriac who works in a soda shop and has no idea what his creepy uncle does for a living. Frankenstein intends to turn the reins over to him, a fact which doesn’t sit well with the other assembled patrons.

The humor derives mainly from predictable sources, namely Felix’s terminal cluelessness about the nature of his fellow party guests and Francesca’s inexplicable attraction to him. But Rankin and Bass have so much fun with the concepts that adults won’t mind their hoary nature. Kids are apt to be delighted, of course, with the assembled monsters making a great introduction to horror’s greatest hits. (It is a crowded house, however, and some of the beasties don’t get the screen time they deserve.) The directors also keep a few twists up their sleeves, notably some throwback musical numbers and the arrival of the god-king of gate crashers in the third act that keep grown-up viewers from growing too complacent.

And like Rankin-Bass’s Christmas specials, the animation itself remains the biggest asset. It’s clunkier than Nightmare and a little thin around the edges, but it still invests these characters with a soul and life that no other technique can match. You can have a great time just watching the monsters work their way across the screen, marveling at the hard work involved and chuckling at the charming gait it lends the film as a whole.

Above all, it captures the spirit of Halloween the same way their holiday specials find the essence of Christmas, and reminds us that gore hounds aren’t the only ones who deserve a little spooky fun every October. For something you can watch with your kids that won’t give them nightmares, give this one a whirl. Better yet, pair it with Nightmare for a swinging double feature that loses the shocks and bloodletting without skimping on the spirit of the season. If you find yourself weary of more hard-core offerings, it might prove just the tonic you need to keep that All Hallows soul alive.