The Lady in White is a near-perfect movie for Halloween viewing, combining elements of the supernatural, a murder mystery, and 1960s nostalgia.  The film is loosely based on the The Lady in White legend, concerning a woman who supposedly searches for her daughter in Durand-Eastman Park in Rochester, NY.

On Halloween 1962, 9 year-old Frankie Scarlatti (Haas) is locked into his school’s coatroom as a prank by some other boys.  He huddles in the corner as the terrifying vision of a little girl is strangled to death.  Just then, a dark figure enters the room, searching for something and spies Frankie.  He nearly kills Frankie as well.  The school’s black janitor is arrested for the crime although there is evidence other than he was found to be drunk. 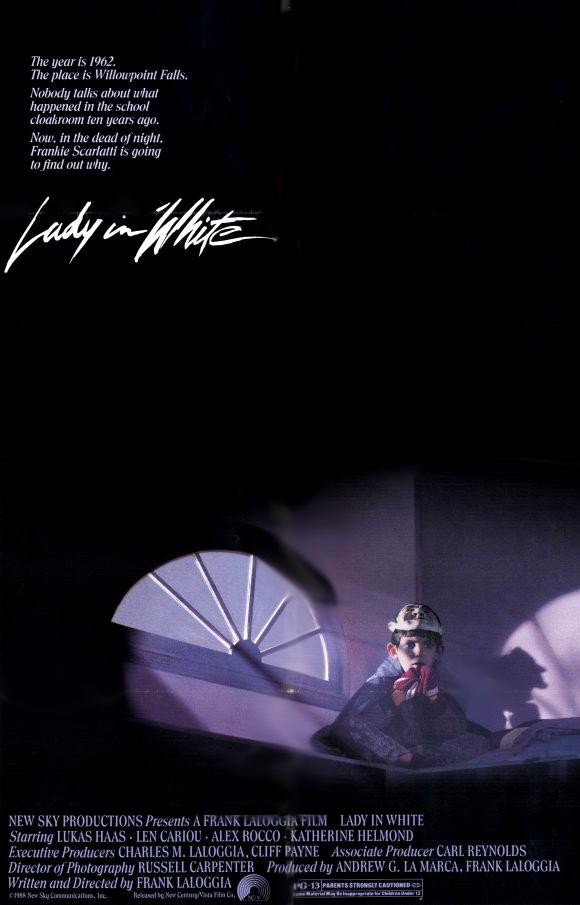 Frankie finds out that the spectral little girl was Melissa Ann Montgomery, and that she was just one victim of an apparent child serial killer.  Melissa begins to haunt Frankie, typing out messages on his typewriter, and pleading with him to help her find her mother.  Frankie returns to the coatroom to try and find what the killer was searching for and finds an old class ring that had fallen into an air vent on the floor.  Frankie believes the ring may belong to the man who killed Melissa and tried to kill him.

The mystery deepens as Melissa leads Frankie and his older brother Geno along a wooded path where her final moments of life are played out and an invisible person carriers her and tosses her body off a nearby cliff.  Frankie and Geno are determined to find out who the killer is before he can make another attempt on Frankie’s life.

What The Lady in White does better than perhaps any other Halloween themed film is capture the essence of small-town, 1960s atmosphere.  Kids dress up in their costumes in school on Halloween day, making Halloween projects as they prepare for the big night of trick-or-treating.  Director Frank LaLoggia makes you yearn for a simpler era as Frankie rides his bike through the tiny downtown area.

The film has a fair amount of chills for a PG-13 film without any gore so it’s ok for older kids, 10 and up.  The mystery elements make for a tantalizing “who done it” as you try to piece together the clues along with Frankie and Geno.  Alex Rocco of The Godfather fame stars as the boy’s widowed father.  They share their home with their Italian immigrant grandparents who add some comic relief in the form of Papa Charlie trying to sneak a cigarette break from his wife.

Lukas Haas’ first big break came in 1985’s “Witness” which starred Harrison Ford.  He is one of those rare child actors who has continued to enjoy a successful career well into adulthood, appearing in some 50 films, including the upcoming “Revenant” with Leonardo DiCaprio.  And I must also mention Katharine Helmond, best known for her sitcom roles, who provides a terrifying turn as the “Lady in White” of the title.  The film is available on DVD, most recently reissued on by MGM in 2005 with 36 minutes’ worth of deleted footage and commentary from director Frank LaLoggia.

Lady in White doesn’t rely on big-budget, CGI effects and doesn’t need them.  It works its magic by creating an atmosphere of mystery and terror through its story and endearing characters.  It’s one drawback is the needless race issue involving the black janitor accused of murder which adds nothing to the story.