Like A Christmas Story, Hocus Pocus is a film that received a lukewarm reception when it was released theatrically back in the SUMMER of 1993. However, over the course of twenty years and through repeated showings on TV, it has become a true Halloween classic. 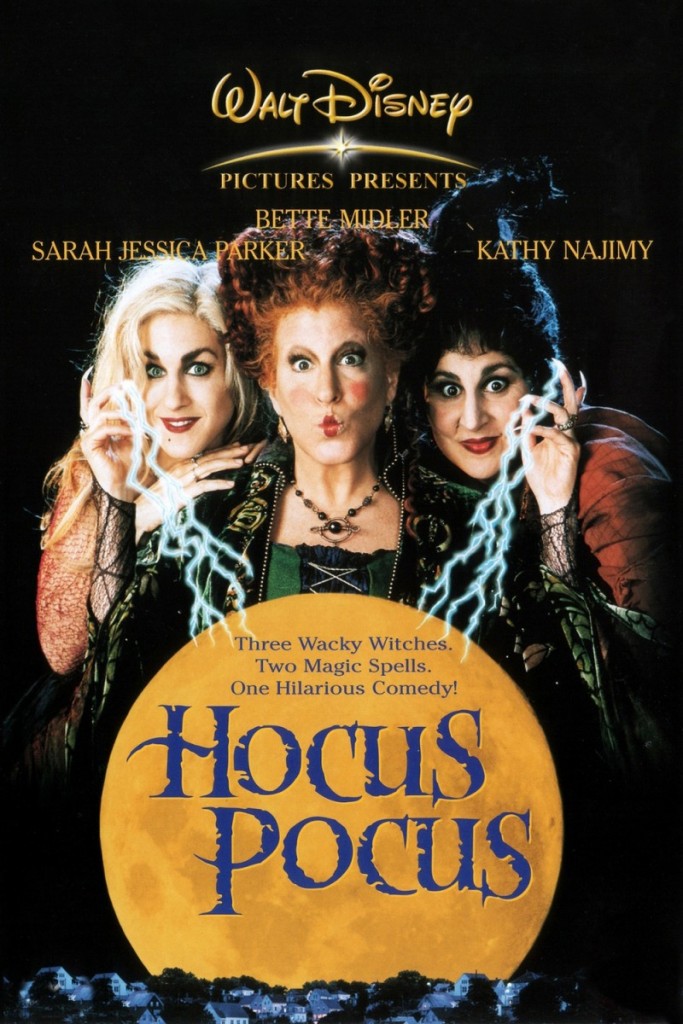 Produced by the Disney Company, Hocus Pocus opens on Halloween in Salem, MA in the year 1693. The Sanderson sisters, a trio of witches that includes Winifred (Middler), Mary (Najimy), and Sarah (Parker) have been captured by the townspeople and sentenced to hang. Before they die they cast a spell which will allow them to be resurrected when a virgin lights the Black Flame Candle.

300 years later, Max Denison and his family has moved from Los Angeles to Salem. Max is unhappy with the new town although his little sister Dani is ecstatic. While taking Dani out trick-or-treating he meets up with his beautiful and rich classmate, Allison (Shaw) whose family now owns the old home where the Sanderson sisters lived and have turned it into a museum. While showing them around the museum, Max unwittingly lights the candle, bringing the witches back to life.

With the aid of Binx, a boy turned into a black cat by the Sandersons back in 1623, the kids escape with Winifred’s spell book. The Sanderson’s plan to suck the souls out of all of the children in Salem but must do so by sunrise the next morning or be forever turned to dust. But to do that, they must get the spell book back. Winifred raises a zombie to life to pursue the kids and retrieve the spell book.

The sisters venture into modern day Salem, acclimating themselves to 300 years of advancements and having several interesting encounters with the town residents including Penny Marshall and real-life husband Gary, who think the sisters are simply older trick-or-treaters. Max, Dani, and Allison have to find a way to save all of the children of Salem before the witches can finish their deadly spell.

Hocus Pocus is one of those films that creeps up on you and weaves its charm spell. At first glance it seems a run-of-the-mill Disney film geared towards kids but there are some moderate scares here such as the zombie, Billy Butcherson with his mouth sewn shut. And of course, the songstress Midler gets a chance to shine with a rousing rendition of Screamin’ Jay Hawkins’ “I put a Spell on You” with her co-stars providing background vocals during a town Halloween party. While most of the film was shot on Hollywood lots, a few portions of the film were shot in Salem and capture the essence of that notorious town during the Halloween season.

The film features a good deal of slapstick humor, often at the expense of the Sanderson Sisters and Mary in particular. When the Witches enter a janitor’s closet to find brooms to fly, Mary is stuck with having to use a vacuum cleaner.

While it might not have garnered that much attention and praise during its initial theatrical release, Hocus Pocus has become an endearing film to fans with its cast of zany characters and Halloween night hijinks.