31 Days of Horror: Halloween III: Season of the Witch

31 Days of Horror Continues!  Now as I said previously, the films that I am covering for our month long all have a distinct Halloween theme.  And with that said, lets get to Halloween III: Season of the Witch!

Starring: Tom Atkins, Stacey Nelkin, Dan O’ Herlihy
Directed by: Tommy Lee Wallace
Original Year of Release: 1982
Run Time: 98 Minutes
Halloween III: Season of the Witch has always been the ugly, red headed stepchild of the Halloween series. When the film came out in October, 1982, fans were naturally expecting to see more murder and mayhem at the hands of Michael Myers. Instead, they got a film that was an odd blend of witchcraft and science fiction and the only film in the series that did not feature Myers. This wasn an attempt by producers John and Debra Hill to try and make turn the franchise into an anthology series with different stories set around Halloween. Horror fans were not amused to put it bluntly. And yet, the past thirty years plus have been good to Halloween III. The film has developed a cult following for all of the reasons that people originally detested. 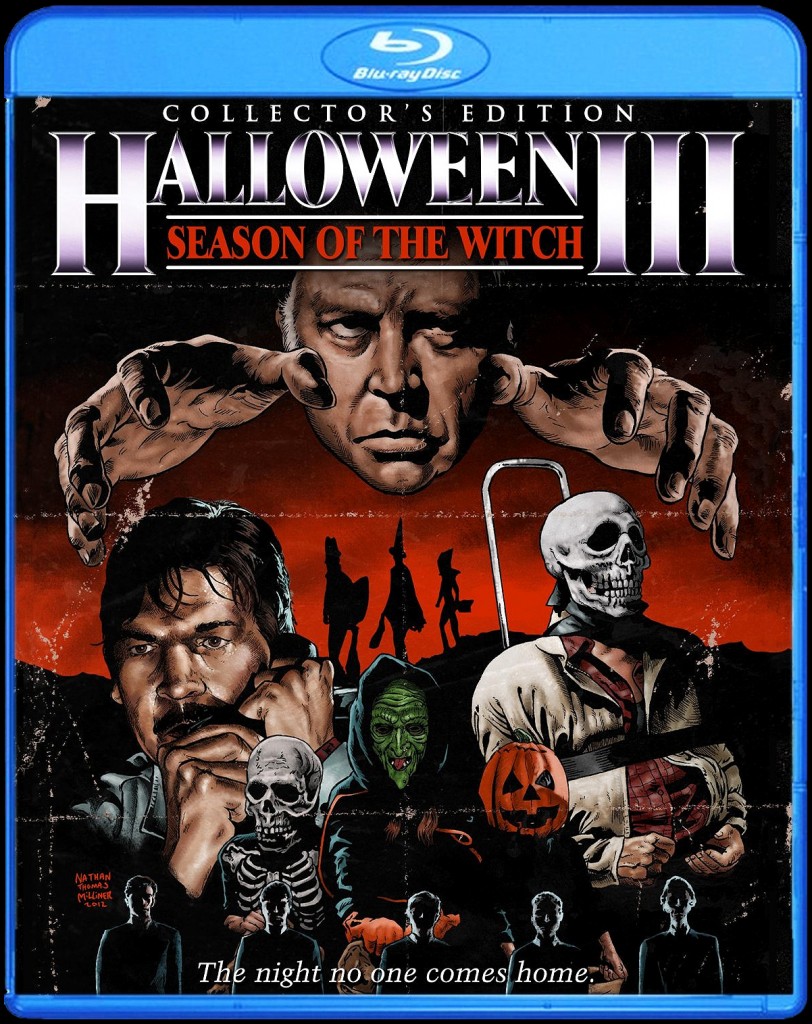 Tom Atkins is Dr. Daniel Challis, the doctor on call when a man named Harry Grimbridge is brought into the hospital raving, “They’re going to kill us all!” When Grimbridge is murdered by a man in the suit who subsequently kills himseld, Challis begins to investigate the bizarre murder/suicide aided by Grimbridge’s daughter, Ellie.

Their investigations lead them to the small town of Santa Mira, California which is home to the Silver Shamrock Novelty Company, makers of Halloween masks among other things. They discover that the company’s owner, Conal Cochran, is using ancient druidic magic and modern science to infuse their masks with a fragment of Stonehenge. Those wearing the masks when the Silver Shamrock commercial comes on TV will die a horrific death and leave behind a swarm of insects and snakes crawling out of the mask. Challis has to try and stop Cochran before the deadly commercials can air on TV which will kill thousands of children.

Upon initial viewing, and I saw it the weekend it came out at a local drive-in theater, my reaction was probably like most peoples, i.e.…WTF??? Not only was there no Michael Myers but what the hell was with this pseudo witchcraft/science mumbo jumbo? No murderers killing promiscuous teens? Damn it! Didn’t they know this was the 1980s? And what the hell was with that annoying Silver Shamrock commercial jingle that played over and over throughout the film…”Three more days to Halloween, Halloween, Halloween…?”

Druids, androids, Stonehenge? And not to mention the cheesy, improbably romance between Challis and Ellie, particularly with him being nearly 25 years older. Well yes we want to find out what happened to her dad but let’s bump uglies in the meantime. And what’s with the fact that the Silver Shamrock Company only seems to make THREE different masks…a witch, a pumpkin, and a skull? That seems to be a pretty lousy business model.

And yet you take the movie, let it simmer for 30 years…let several other Halloween films with Michael Myers come out including the wretched Rob Zombie remake, and all of a sudden Halloween III isn’t looking so bad. It’s like a guy who wouldn’t have given a second glance to the plain Jane girl when he was in high school, is not middle-aged and suddenly that girl is looking a whole lot better.

The silliness that worked against the film when released has become its strong points. The bizarre mix of elements are so over-the-top that it crossed over into the “so bad it’s good” category. And that incessant, annoying Silver Shamrock jingle? Well, it’s not Halloween if you don’t hear it at least once each season. It’s taken a few decades but Halloween III: Season of the Witch has finally earned its place in the annals of Halloween movie classics.