The opening titles of Inner Ghosts pays conspicuous tribute to The Shining with backwards scrolling credits. One might suppose knowledge of that subtle, character focused, metaphorical exploration of numerous themes while creating lingering dread. For a time the slow burn approach of Inner Ghosts itself made me very hopeful…until the loud typical horror movie jump scares and longwinded exposition practically ruined everything. 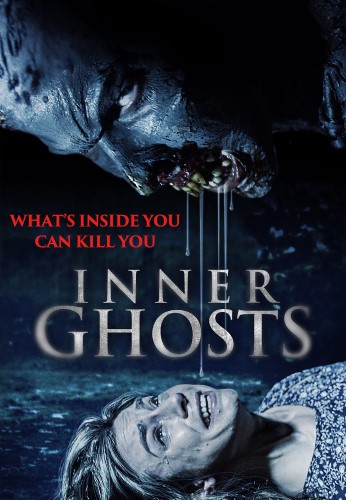 This film is under the misapprehension that explaining something makes it more frightening. The idea of ghosts having a scientific explanation is potentially interesting, but it’s not very scary if you can literally beat a poltergeist by turning on an electronic device. The reason that movies like The Grudge and The Ring work is the primal terror that even our most advanced technology will not only fail to save us from danger, it might be used against us. Inner Ghosts believes that it can wring fear from people who are completely capable of using psychology and technology to circumvent the supernatural. Which makes it all about as scary as Ghostbusters.

And no version of that series could be easily classifiable as trying to be a horror movie. The plot has a lot of potential. A researcher of renown is investigating treatments for Alzheimer’s disease. Known to a few she is also a medium capable of contacting the spirits of the dead, which in this story’s universe are the energies of human consciousness freed from their physical shells. She tries to combine her research using empirical data with her supernatural sessions, and in the process stumbles across an entity of less than friendly disposition called a Hunter who threatens anyone capable of detecting it.

I liked the notion of psychoanalyzing ghosts: that seems like a fully original concept and a breath of fresh air for an oversaturated genre. The idea of scientists gleaning new advances from practices the public would immediately discount because they were once called magical or mystical but which prove to work anyway has a lot of parallels with the history and ongoing legacy of science itself.

But where Inner Ghosts stumbles and falls is the attempt to not just create parallels of science and mysticism but to create a convoluted and arbitrary explanation why mysticism and science are THE SAME. Essentially ghosts moving stuff around, possessing people, being invisible…that’s all true, but as the characters exhaustively try to explain its due to physical forces in reality acting like metaphysical events. I think all told it would have been smoother and better for the story and scares to explain considerably less. If your demons and ghosts are going to act like demons and ghosts but you spend half your film apologizing for them being there because they aren’t REALLY demons and ghosts but just scientific phenomena that happen to appear EXACTLY like demons and ghosts…

It all turns into a merry-go-round of confusion that drowns the most interesting aspects of the production and the great performances until the final act decides to have the characters cease to act like regular people and become hyper-charged with inexplicable drama. It’s one thing to suggest a funder of research might be a little miffed about his research coming primarily from literal seances. It’s another entirely to expect him to pull a gun and monologuing like his a villain from a bad cop show. It doesn’t help that there’s a McGuffin device that looks like a literal Tinker Toy.

This is the kind of film I wish someone could reconfigure: taking the general compelling notion here and putting it in a better story. This talented cast, the solid effects work, the atmospheric direction…it all deserved more than what boils down to a weird combo of a lecture on metaphysics and an episode of Scooby Doo.