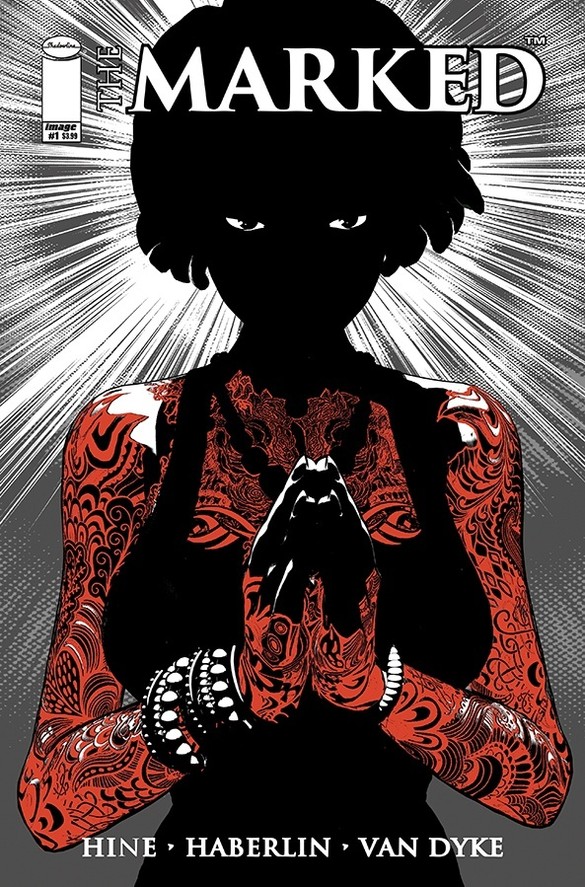 Described by co-creator Brian Haberlin as “my chance to do magical, dark and sexy”, this whopping forty-page periodical certainly delivers on some of of the Hawaii-born writer/artist’s aspirations with its plausible mix of both the modern day world and that of the monster-infested Occult. In fact, up until the diminutive Saskia enters the mysterious Art School and meets the dangerously naive Liza and matriarchal Mavin, Issue One of “The Marked” reads like some sort of straightforward yet savvy, street-life publication arguably aimed at the adolescent market; “Me, I don’t get it. It’s a woman wearing super strong hairspray. What’s to see?”

Fortunately however, just as soon as Kismet starts working her seventeenth generation inscription magic upon the slender back of this book’s doe-eyed heroine, the comic’s narrative very quickly picks up pace as its audience is introduced to the devilishly intriguing history of the Marked, and their centuries-old battle against all manner of slavering, sharply-fanged foes. These flashbacks to Feudal Japan, the swashbuckling High Seas and Hitler’s enthralling gamble “on a victory for the demons he has summoned” during World War Two, genuinely provides a deeply rich backstory to the “righteous few who carry the Talent”, and makes it crystal clear just why little Saskia would so quickly fall for the ‘Harry Potter’ like lifestyle on offer to her.

Undoubtedly assisting in this enticement is Haberlin’s less traditional art style, which really helps bring this “all-new ongoing fantasy series” to vivid, colourful life. Whether the Wizard Fan Award-nominee is busy illustrating the painstakingly detailed magical glyphs of his “cool young influencers”, or filling the nightlife with the sort of sense-shattering bright lights and pumping disco music one would expect for such a vibrantly young community, it is clear just why co-author David Hine stated that “one of the highlights for me is the way Brian has used his digital skills…”

Perhaps somewhat disappointingly though, what this collaborative concoction does lack is an actual antagonist for the group of uber-inked metahumans to face in their title’s opening instalment. Admittedly, Liza’s abrupt removal from the ‘educational institute’ following her aggressive defiance to accept responsibility for the creation of “a dangerous new form of hybrid sorcery”, does lead to an all-too brief physical confrontation with the vastly superior Mavin. But this childish attack against her “teacher” debatably lacks much menace, especially when compared to the grandiose threat previously depicted by the Third Reich and its ghoulish allies.