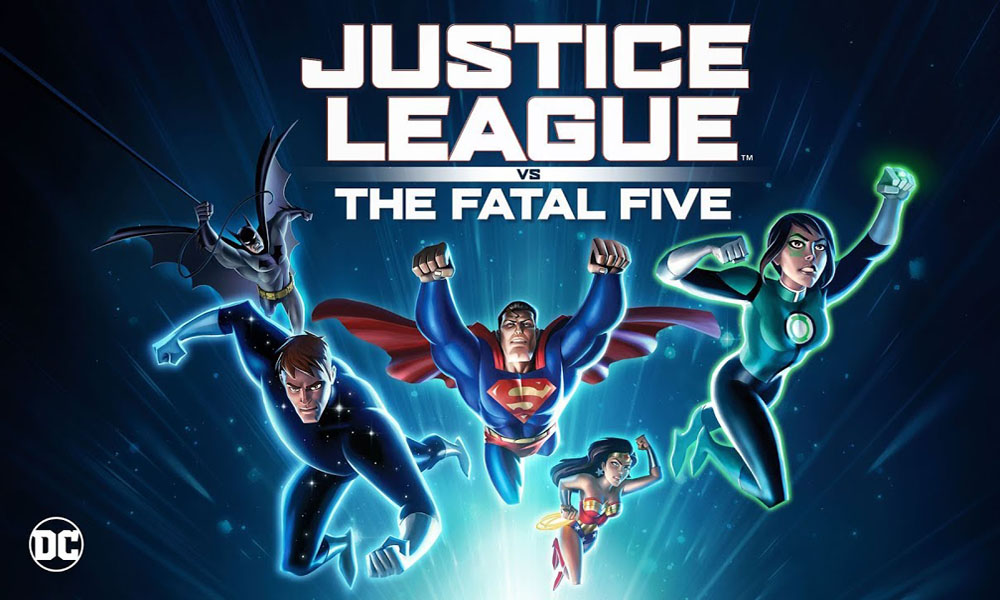 Justice League vs. The Fatal Five is the latest original animated film from DC Comics/Warner Brothers Animation and features an enormous cast including The Justice league, The Legion of Superheroes, as well as several members of the Green Lantern Corps. 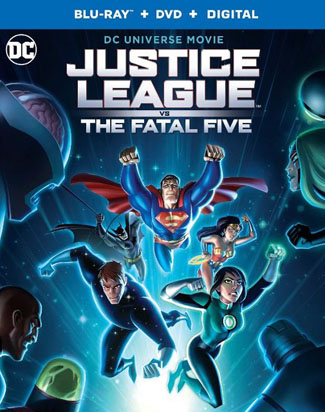 In the 31st century, Tharok, Persuader and Mano attack the headquarters of the Legion of Super-Heroes, trying to steal their time ship. Star Boy, Saturn Girl and Brainiac 5, try to stop them but fail miserably. The villains manage to steal the ship but Star Boy hitches a ride with them back to the 21st Century and manages to trap them in a stasis field within the ship. Star Boy, however, is left without the drugs he needs to stabilize his mind. His erratic behavior leads to him being captured by Batman and committed to Arkham asylum.

Months later, the Legionnaires time ship is in the JLA headquarters where Mr. Terrific unwittingly frees the villains from Stasis. Persuader severely injures Superman with his axe and the villains escape. Their goal of travelling to the 21st century is revealed at last to be freeing Emerald Empress and Validus, who are being held prisoner by the Green Lantern Corps. The Fatal Five needed new Green lantern, Jessica Cruz, in order to help free their fellow villains. The Emerald Empress intends to use her Emerald Eye to drain the energy from the Lantern’s central power battery. The Justice League: Superman, Batman, Mr. Terrific, Miss Martian, and Jessica Cruz must stop the Fatal Five before they prove too powerful to stop.

A central theme of Justice League vs. The Fatal Five is diversity which is why we get Miss Martian instead of the Martain Manhunter, Jessica Cruz instead of Hal Jordan or Guy Gardner, and Mr. Terrific who is more known as a member of the Justice Society. However, screenwriters Eric Carrasco, Jim Krieg, Alan Burnett do a good job of working these less familiar characters into the story naturally as opposed to shoe-horning them in just for the sake of PC culture.

Jessica Cruz’s backstory isn’t one of unparalleled courage like most Green Lanterns but rather one of a person unsure of their powers and unwilling to join the fight due to traumatic events in her past. Miss Martian is a relatively new character, created in 2006, but she serves to take the place of The Flash as the young and often reckless member of the team as she tried to prove her worth to be awarded permanent membership. Mr. Terrific did not work as well for me in the film as Terrific was always the JSA’s version of Batman, i.e. a man with no superpowers but a genius and Olympic level athlete.

The movie also features a flashback battle sequence showing how Emerald Empress was originally captured by the LSH and features appearances by Chameleon, Dawnstar, Tyroc, Mon-El, and Shadow Lass.

Kevin Conroy, George Newburn, and Susan Eisenberg reprise their roles as the voices of Batman, Superman, and Wonder Woman respectively. They are joined most notably by Tom Kenny, best known for voicing Spongebob Squarepants and Diane Guerrero as Jessica Cruz.

Justice league vs. The Fatal Five is a surprisingly violent movie and definitely earns its PG-13 rating. Super Friends it is NOT! The Fatal Five are not exactly a well-known group of villains but the writers make them work. These are some seriously bad people with little regard for the innocent victims they leave behind in their path of destruction. This one is a solid addition to the DC library.

Battling The Invisible Menace (08:05) – A discussion of the mental health issues raised in the movie, including Jessica Cruz’s anxiety disorder and Star Boy’s schizophrenia.

Justice League Vs The Fatal Five: Unity of Hero (15:11) – While DC did not ger heavy handed with the diversity in the movie, they do in this over-the-top, self-congratulatory extra of Social Justice Warrior nonsense. Skip this one.

Legion of Super Heroes (22:44) – The episode “Man of Tomorrow” is included from the 2000s cartoon featuring the Fatal Five.

Justice League Unlimited (22:57) – The episode “Far From Home” with Supergirl and Green Lantern traveling to the future and meeting the Legion of Super-Heroes.