I popped in this blu-ray expecting to see another zombie film and instead an enjoyable World War II action film broke out. And such is the quandary with this film that advertised itself heavily on its horror/fantastic elements when in reality it largely downplays those elements for about 75% of the film. 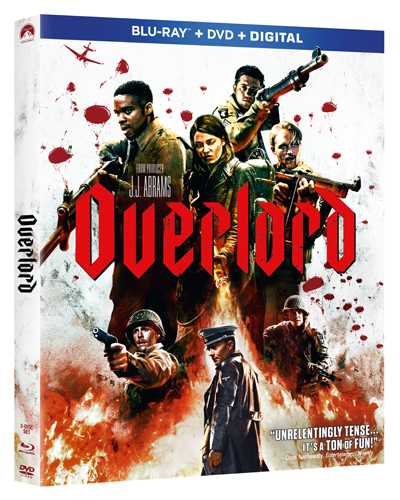 Overlord takes its name from “Operation Overlord” the code name for the pivotal D-Day invasion of Normandy during World War II. On the eve of the invasion, a paratrooper squad is sent to destroy a German radio tower located in a small French village. Along the way the invasion force is prey to incredible flak from German defenses which tear the Allied airplanes to shreds. It brought back images of the opening sea assault scenes from “Saving Private Ryan” and the sheer terror that the soldiers had to endure.

The sheer chaos leaves many of the paratroopers dead or scattered by mis-jumps. Only four soldiers survive to complete the mission: Corporal Ford (Russell) and soldiers Boyce, Tibbet, Chase. The four men take refuge at the home a French woman named Chloe who lives with her younger brother and ailing Aunt. Chloe is allowed to live in relative safety to the occupying Nazi forces only because she submits to the sexual advance of Captain Wafner, a member of the SS.

Boyce is able to infiltrate the radio tower to gain intel and discovers that the Nazis are performing horrifying experiments on the villagers, using the supernatural tar of the village to try to create a super soldier formula, turning them into undead, killing machines. The soldiers know they must not only destroy the tower but also end the Nazi experiments.

Overlord could, and does work quite well as a small-scale action war film. Hollywood has made hundreds of such war films for decades. In fact, the supernatural elements actually dilute the war/action elements. I think I would have been perfectly happy without them. There’s a near fatal lack of commitment to the horror side of the story from Director Julius Avery. What we end up getting is an unoriginal, Dr. Frankenstein/mad scientist plot whose experiments run amuck.

Still, Overlord has some fantastic action sequences and is bolstered by several enjoyable performances including Wyatt Russell (Kurt and Goldie Hawn’s son) as the corporal who finds himself thrust into the position as leader, and Jovan Adepo as Private Boyce, a raw African American soldier who is only weeks out of basic training.

While Overlord misses the mark as a solid horror film it works well enough to make for a fun, Saturday night diversion.

The Horrors of War (51:00) A collection of six smaller featurettes that offers interviews and on-set footage.