13 Graves is a thinly-plotted UK horror film about two hitmen for a British organized from organization and the unexpected terrors they face when trying to dispose of the body of their latest victim. The film features a cast of capable English actors whose credits include films and TV series such as “Being Human”. “Coronation Street”, and “Persona”. Unfortunately the cast simply doesn’t have much to work with in the plodding story written and directed by John Langridge. 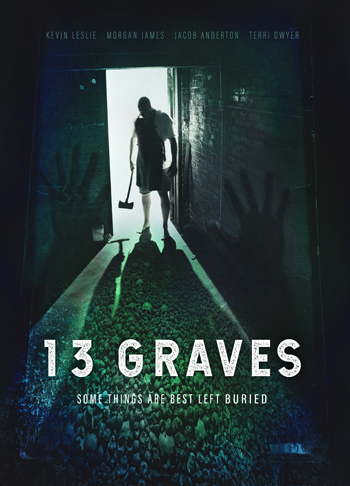 Frank (Kevin Leslie) and Terry (Morgan James) are the two contract killers who are the center of the story. Their boss, Maddy (Terri Dwyer) orders the two to kill Billy (Jacob Anderton) who was caught trying to steal from the organization. The two lead Billy out to a patch of woods that they have used numerous times to bury bodies….their own mob graveyard.

Billy manages to escape the pair, fleeing into the thick woods. The killers know they will be the next ones buried if they fail their boss. However as they hunt Billy down they find themselves being stalked by a supernatural force which haunts the woods. Is it the ghosts of their victims returning for revenge? Is it their reanimated bodies? Frank and Terry face a mounting litany of terrors as their simple hit turns in a fight for survival.

On the surface, 13 Graves has an interesting if unoriginal premise with the victims of murder returning from beyond the grave seeking vengeance against their killers. Director John Langridge simply didn’t do enough to flesh out the action. Most of the first two-thirds of the movie is spent with the three men wandering through the woods either looking for their quarry or trying to find a way out, and roaming in circles. Pretty soon the viewer feels their pain, just wanting a way out of the movie.

When things pickup and our antagonists are revealed there’s scant development and just who or what they are is left hazy and incomplete. It doesn’t seem like Langridge knew what in direction he wanted to go, much like the characters. 13 Graves also suffers from a lack of tension and suspense which gives way to clock watching boredom.

It’s a bit of a shame to be sure. I actually enjoyed the cast. Leslie and James found a way to make their stone-cold killers likable and fun to watch.